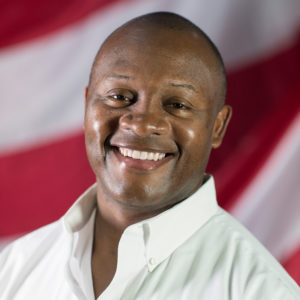 Eddie Edwards: “It Is An Honor To Serve”

When I think about America, I think about service and the commitment necessary to protect those ideals that make our country great. I also believe that most Americans love our country and want to find a way give back. I know I felt that way, which is why I chose to serve in the United States Navy, and I served every day with pride.

My military service taught me that we must get back to a place where people actually believe in our country. Where our children grow up thinking of how much respect they have for our flag, our Constitution, and the men and women who came before them to secure the freedoms we have today. A lack of appreciation for our veterans is one of the driving causes for why our patriots have been so mistreated when they come home. We must not rest until we change that.

After my time in the military, I went into law enforcement, and I served there for many years working on public safety. I worked with my brothers and sisters in blue to protect our streets and help fight the growing opioid epidemic. There too, I served with pride. It was an honor to continue to find a way to serve the great state of New Hampshire in a different way than I had been able to in the United States Navy.

Now that I am running for the United States Congress, I look at this next step as another act of service to our state and nation. For too long, career politicians looking to climb up the next rung on the ladder of political success have run our country and done so very poorly. We must change that.

A career in politics is not what our Founding Fathers intended, which is why I am such a strong supporter of term limits. It is also why I pledge that I will not take a government pension or participate in the Congressional healthcare system. I want to work towards fixing a broken Washington and then return home to allow others to continue to fight for the values we hold dear.

I want you to know that I am running because I believe it is time for a patriotic and conservative outsider to be the voice for New Hampshire’s First Congressional District. For over a year, I have been traveling the district and talking with the voters. I have been to every city and town and am the only candidate on either side of the aisle holding public town hall meetings to listen to the concerns of the voters.

Like me, a majority of the voters I speak with want to continue to cut taxes, repeal Obamacare, and grow the economy. Like me, they want to build the wall, reform our broken immigration system, and ensure our Second Amendment rights are protected. Most importantly, like me, they want to fundamentally change the type of people we send to Congress. They are hungry for a new direction, but, like me, they also know that we cannot get there if we are not unified in our mission.

Fellow Granite Stater, I humbly ask for your vote in the Republican Primary on Tuesday, September 11th. If we work together, I believe we can bring back that commitment to service we need on Capitol Hill and return a respect for the values we hold dear to Washington.

1:  Where did you go on your first date?
2: If someone hit the “play” button on your iTunes Player/CD player/phonograph, etc—what song would play right now?
3: You’re leaving on a mission to Mars, never to return. You can have one last meal on Earth—and it’s in New Hampshire. What is it?