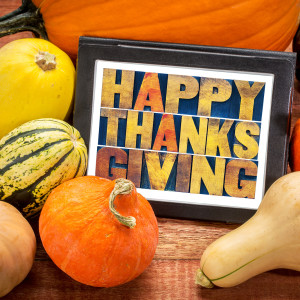 EBSTEIN: My Thanksgiving State of Mind

I recently learned something I hadn’t fully appreciated. Parents of Gen-Z’ers told me their kids don’t want to celebrate the Thanksgiving holiday because of our history with Indigenous Americans. History has a long arc, and we have the opportunity along the way to learn and do better. With that in mind, I offer my 2022 take on Thanksgiving.

First, some fun turkey trivia, which might help lighten the mood.

Question 1: Who do we thank for declaring Thanksgiving a national holiday?

Answer: The generally recognized first Thanksgiving happened in 1621, with likely no turkey. It wasn’t until 1863 when Sarah Josepha Hale, who wrote “Mary had a little lamb,” petitioned President Abraham Lincoln that it became a national holiday. Hale’s nickname? “Mother of Thanksgiving.”

Question 2: When was the first Macy’s Day Parade?

Answer: The first parade was in 1924 and was called the “Macy’s Day Christmas parade,” hoping to spark holiday shopping. The parade included monkeys, bears, camels and elephants taken from Central Park Zoo — and no character balloons. Snoopy, where are you?

Question 3: How many turkeys are consumed on Thanksgiving?

Answer: It’s estimated that 46 million turkeys are cooked. How many are fully consumed is a different answer. Instacart says that 68 percent of Americans don’t actually like turkey and its side dishes.

Question 4: What is this holiday’s one lasting contribution to American culture that has spanned decades and will continue?

Answer: Frozen TV dinners. In 1953, Swanson completely overestimated the number of turkeys to be ordered, leaving them with 260 extra tons of turkey! Swanson turned its mistake into an opportunity, creating reheatable turkey dinners packaged in individual trays. Swanson sold 10 million frozen turkey dinners in 1953, and the frozen TV dinner was born.

And now for my message that is more than the long arc of history:  In 2022, I am grateful that comebacks are possible. Clearly, we are still in the process of trying to come back from COVID. All the qualifiers in that sentence will attest to the challenge — “still,” “process” and “trying.”

But I believe in comebacks. They happen. I live in Boston and was fortunate enough to experience the Red Sox’s comeback to win the 2004 ALCS after being down three games and on the brink of elimination. From there, they clinched the World Series. More recently, in 2020, the Chicago Cubs came back from a 3-1 deficit to win their first World Series in 108 years.

In our own lives, we are experiencing comebacks. Restaurants are open. Travel is happening. Some people are eating indoors at other people’s homes. It is true that the dinner menu itself is designed based on what the stores have in stock because the supply chain is still lumbering, but who really cares?

At our turkey dinner, I am going to ask people to remember a meaningful comeback that they experienced. It could be as significant as recovering from a health episode or as emotionally demanding as rescuing a failed project at work. It could be as silly as the spice turmeric, which is making a comeback in our diets. Oh, the places you can go.

One of my favorite comebacks concerns Ernest Hemingway, a prolific and highly respected author in the 1930s. Then he had a bad stretch, going ten years without publishing a novel before releasing “Across the River and Into the Trees,” which was panned.

Hemingway was depressed, and his reputation was in ruin. In 1953, he wrote “Old Man and the Sea,” which drew parallels between Hemingway’s failures and his unsuccessful fisherman protagonist. It won him the Nobel Prize. Reputation restored.

Comebacks are everywhere, and they are inspiring, which brings me back to the turkey on Thanksgiving day. Turkeys are celebrated as the cornerstone of our Thanksgiving holiday. Benjamin Franklin is on record for wishing that the turkey, which he dubbed a “respectable bird,” should have been the national bird used to represent our country.

Yet for all its glory and grace, most Americans don’t like eating turkey, which gets only one day of prominence all year. It might be a literary stretch to call the turkey a “comeback pheasant,” but it has found a niche in our culture and symbolizes a day of gratitude and love.

To this, I say, “Pass the turkey, pass the gratitude, and relish the comeback while we toast nearing the end of a challenging year.”

Jill Ebstein is the editor of the “At My Pace” series of books and the founder of Sized Right Marketing, a Newton, Massachusetts, consulting firm. She wrote this for InsideSources.com.