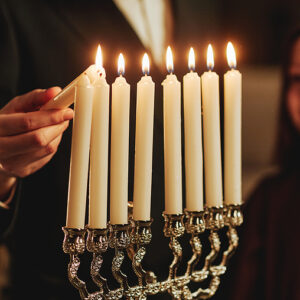 The season is upon us, and with that comes a primer on Hanukkah so you can be in the “holiday know.” It is common knowledge that Hanukkah lasts eight days and that candles are lit each night, with the number lit being the night of the holiday.

But that’s just a start. Here is more background to greet the holiday.

Back in 190 B.C., the Greeks occupied Israel and imposed their will. They required that Jews help finance their military through taxes and house their soldiers in their homes. They placed a Zeus statue in the Temple courtyard and banished Jewish observances, including the sabbath and circumcision of newborn boys.

When the Greeks demanded that Jews sacrifice a pig to Greek idols, a line was crossed. In 166 B.C., a group of Hasmoneans led by Mattathias had enough, and violence ensued. Complete chaos broke out, and a war began between the Jews and the Greek army.

Mattathias and his five sons led the Maccabees in guerrilla warfare against a much better-equipped Greek army. After Mattathias was killed, the Maccabees were led by Judah, Mattathias’ son. Their army expanded from 3,000 to 12,000 men, though still significantly smaller than the 50,000-men Greek army.

Through guile, courage and hit-and-run tactics, the Maccabees eventually defeated the large army, though it took five years. The Jews returned to the Temple and shattered the statue of Zeus. The story goes that, once inside the Temple, the Jews found one small flask of oil to light a flame. After the flame was lit, one night’s worth of oil lasted eight days.

Hence, Hanukkah is referred to as the “festival of lights,” and we light candles for eight nights to celebrate the many miracles — both the long-lasting oil and the defeat of the mighty Greek army. A ninth candle, referred to as the “shamash,” lights the candles. Its meaning has been interpreted as a symbol of the power of light over darkness.

Food: Latkes, fried potato pancakes made of shredded potatoes with onions, are eaten. It’s best not to count the carbs or fat grams when enjoying. There are latke variations, including sweet potato, broccoli, zucchini, cottage cheese and much more. Apple sauce and sour cream typically accompany the latke. One other Hanukkah delectable is jelly-filled fried donuts called “sufganiyot” — a kid’s treat.

Dreidel: A betting game is played by spinning a four-sided “dreidel.” Each side has a Hebrew letter to remind us that “A big miracle happened here,” where the first letter of each significant word is displayed. Players settle their bets based on how their dreidel lands. The typical ante includes small coins like pennies and nickels, or better yet, chocolate coins called “gelt.”

Singing: Blessings are said, and songs are sung during candle lighting. It is still my family’s favorite part of the holiday. Some songs are very simple such as “Dreidel, Dreidel, Dreidel,” and others are sung in Hebrew, in rounds, and require more knowledge.

Gifts: Probably because of the timing that Hanukkah falls near Christmas and Christmas is the ultimate gift-giving holiday, Hanukkah has become gift-focused as well. It wasn’t viewed initially as a time to exchange presents; in some homes, there can even be a gift for each night. I won’t opine my thoughts.

Timing: Unlike Christmas, which always falls on December 25, Hanukkah falls on the 25th of Kislev, a Jewish calendar month. That was the date that the Jews took control and rededicated their Temple. The use of the Hebrew calendar explains why Hanukkah falls on different dates in the Gregorian calendar.

The meaning we give to Hanukkah is layered and a personal preference. For some, it is a time to look inward and apply a larger purpose to the “Festival of lights.” American folk trio Peter, Paul & Mary proposed their interpretation with their song “Light One Candle.” They suggest a universal candle representing justice, hope and peace.

I was taught to view the holiday through a Jewish lens of history and heritage. This is the 50th year marking the passing of Abraham Joshua Heschel, a great sage and Rabbi who lit our world with love, meaning and goodness. He shared that for us to do God’s work, we need to recognize the spark of the divine within us and treat fellow humans accordingly.

That would be an excellent takeaway for this holiday of light.

Jill Ebstein is the editor of the “At My Pace” series of books and the founder of Sized Right Marketing, a Newton, Massachusetts, consulting firm. She wrote this for InsideSources.com.