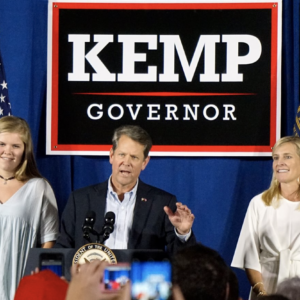 New Hampshire’s 2024 presidential contest may not have officially started, but Georgia Gov. Brian Kemp’s 52-point rout of former U.S. Sen. David Perdue offers a roadmap for Republican candidates trying to navigate the choppy post-Trump GOP waters heading into the First In The Nation primary: Ignore the noise, and outline a clear and unapologetic conservative vision for the future rather than dwell on past losses.

When Perdue launched his bid in December 2021, few expected a landslide victory of these proportions. After all, Perdue is the cousin of a former governor – a one-time senator with a sterling private sector career. He also had a ticket to what was seen as an unstoppable freight train in GOP primaries — the full and enthusiastic support of former President Donald Trump, one of his closest golfing buddies.

Trump had put Kemp – and Georgia Secretary of State Brad Raffensperger– at the top of his political hit list for their refusal to support his unfounded claims of election fraud. Kemp had certified the 2020 election results while Raffensberger had rebuffed Trump’s demand to “find” enough votes to flip Georgia’s election outcome.

From the outset, Perdue grounded his entire campaign on conspiracy theories. His first campaign ad featured Trump speaking to the camera blasting Kemp. Perdue opened a recent debate by saying, “Let me be very clear tonight, the election in 2020 was rigged and stolen.”

Both the pundits and the polls predicted a barn burner of a race. An Atlanta Journal-Constitution headline from December blared, “‘A mess’: Kemp under pressure from both sides in 2022 race.” A poll conducted on the same day as the Trump endorsement showed the contest tied.

Public confidence in the Biden administration, badly damaged from the humiliation in Afghanistan, continued eroding. Nearly 70 percent of the country believed we are heading in the wrong direction, according to the Real Clear Politics average. Suddenly, the comparisons between Biden’s administration and Jimmy Carter’s started sticking.

Even Stacey Abrams, the Democratic nominee for governor, found a “scheduling conflict” when Biden came to Georgia. Meanwhile, Kemp ran on his record, pointing to his economic stewardship of the state’s economy. Last year, for the eighth consecutive time, our state was named the “top state for doing business.” The closing week of the campaign found Kemp at a ribbon-cutting for a $5.5 billion electric vehicle and battery manufacturing facility near Savannah, a project expected to create 8,000 new jobs.

Kemp also leaned hard into his leadership during the COVID pandemic. In April 2020, Georgia was one of the first states to allow businesses to re-open from government-mandated shutdowns. The move earned Kemp predictable criticism from the left, but also from Trump, who called the move, “too soon,” and said businesses “can wait a little bit longer.”

By the end, Trump’s endorsement carried the weight of Matchbox car more than a freight train. Perdue’s closing message consisted of, “We may not win Tuesday, but I guaran-damn-tee you we are not down 30 points.” Even Raffensberger cleared the 50 percent margin against a Trump-backed challenger to avoid a runoff.

This week, we learned Georgia voters want to focus on the future. We also know two of the most toxic endorsements these days are Donald Trump and Joe Biden.

Republicans are on an inside track to win back Congress this fall based on the country’s rejection of the Biden presidency. Taking back the White House will require our own vision, and New Hampshire will play a major role in the nominating process. Since 2020, Georgia has been seen as ground zero for Republican failure: A diversifying state going blue at the presidential level for the first time in a generation and electing two Democratic senators. Now we are showing others how to turn the page and move forward. We can and have done it without Donald Trump, and our party is better off for it.