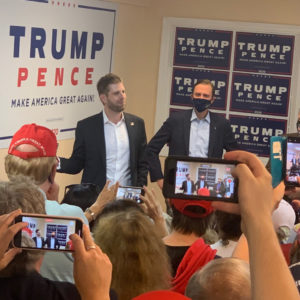 ‘Disgusting:’ Eric Trump Calls Out NHDems Who Refused to Stand for Anthem

President Trump’s son Eric denounced New Hampshire Democrats who refused to stand for the national anthem during the final House session of the year, and he rejected progressive calls to “rewrite America.”

“Yes, I saw that and I thought the quote was absolutely disgusting,” Trump told NHJournal during a campaign trip through the Granite State Thursday. “My dad doesn’t want to ‘rewrite America. He loves this country and doesn’t apologize for American greatness. We should celebrate that, not apologize.”

On Wednesday during the Veto Day session, dozens of NHDem state reps knelt or remained seated during the national anthem, many in protest of what they believe is ‘systemic racism’ and other failings of the country. State Rep. Nicole Klein-Knight explained her decision to kneel by telling NHJournal: “I feel like the America I was taught about in school doesn’t depict the America I see today. If equality for all means only for a few, maybe it’s time to rewrite America.”

Eric Trump rejected the idea that America and its symbols aren’t worthy of being honored, though he acknowledged there’s always room for improvement. And, he claims, Americans who feel the same way tend to support his father’s re-election.

“I mean, I was just at an event in Portsmouth and it was amazing. Hundreds of people together, and they were all patriotic. I’ve traveled thousands of miles through the swing states and it’s everwhere: People wearing American gear, waving American flags, the car and boat parades, the rallies. It’s unbelievable.”

Team Trump has made appeals to patriotism a key part of its campaign. The same day Eric Trump was in New Hampshire and Maine, President Trump was at the National Archives marking the anniversary of the Constitution’s signing with the announcement of a “commission to promote patriotic education.”

The younger Trump sees another form of love at work in the 2020 campaign.

Asked whether Trump won in 2016 because of voters’ dislike of Hillary Clinton rather than affection for his father, Trump replied:

“One of the proudest moments for me as a son was two nights ago in Arizona. You know, back in 2016, what did the crowds chant? ‘Lock her up!’ But in Arizona, the crowd started chanting ‘We love you.’ And that’s a very different chant, I can tell you.”

Trump believes this passion for his father will be seen on Election Day.

“When America sees a crowd chanting ‘We Love You,” and they know what these animals [in the press] have put my father–and our whole family– through. They know he doesn’t need this job. They know he’s not doing it for himself. He’s doing it for this country, and there’s a massive appreciation and massive love out there.”

His view runs counter to polls showing President Trump is unpopular both nationwide and in New Hampshire. The latest FiveThirtyEight poll has Trump’s approval at just 43 percent and disapproval at 52 percent. Doesn’t this bolster the premise that Trump’s victory was mostly a rejection of Clinton?

“Don’t forget, they may have hated Hillary, but many of the same people say they aren’t sure Biden has the aptitude to be president,” Trump said. “They don’t want a candidate who can’t remember what day of the week it is, or where he’s going the following day, or who can’t answer a question without a teleprompter, or who hasn’t left his basement in weeks.”