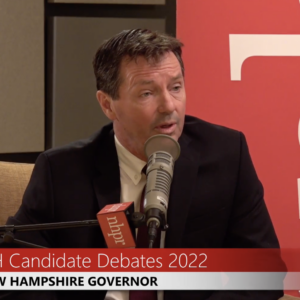 Did Tom Sherman Say NHDems Want to Take Away Your Guns?

At the end of the gubernatorial debate between Sherman and incumbent Republican Gov. Chris Sununu, NHPR moderator Josh Rogers asked the two candidates to show their political independence by naming “a major issue where you break from your party.”

After an extended silence, Sherman answered that, unlike the Democratic Party, “I don’t think we need to take away people’s guns who are using them legally.”

Sherman, who won his party’s nomination without a primary, is trailing Sununu by double-digits in public polling. Ratings organizations like Cook Political Report list the seat as “Safe Republican.”

“Probably the most important one that I break from my party on is going to be that I don’t really believe — I guess, on guns. I don’t think we need to take away people’s guns who are using them legally. If they’re hunting, for self-defense, recreation, or for work they should have access to that. And I’ve always defended that.”

Sununu interrupted, “Do you think the [Democratic] party as a whole wants to take guns away? Is that what you’re saying?”

Sherman quickly backtracked. “No. No, I’m just saying there are some in my party…” He was interrupted by Rogers who was trying to get Sununu’s answer as the debate was wrapping up.

Sununu pointed to the many GOP bills he has vetoed, including the Republican-drawn maps for the state’s two congressional districts.

NHJournal asked the Sherman campaign if it wanted to clarify his comments. It declined to respond.

Second Amendment supporters said Sherman was, as Cam Edwards of BearingArms.com put it, “saying the quiet part out loud.”

“He’s not wrong. From California to New York, for example, the recent response to the Supreme Court’s decision striking down New York’s ‘may-issue’ concealed carry system has been to criminalize the right to carry as much as possible while placing as many roadblocks as they can between the average citizen and their right to armed self-defense.

“I have no idea how sincere Sherman is, but I’m sure he’s at least smart enough to know that the standard Democratic position on guns and the Second Amendment isn’t going to play well in a permitless carry state like New Hampshire,” Edwards said.

In July, Congress took up a bill to ban the sale of certain semi-automatic rifles sometimes called “assault weapons,” a ban supported by New Hampshire Reps. Annie Kuster and Chris Pappas. Sen. Maggie Hassan has also supported a ban on the sale of these rifles including AR-15s, among the most popular rifles in the state.

According to the National Shooting Sports Foundation, the Granite State ranks first in the nation in terms of total gun manufacturing jobs and economic output per capita.

In 2019, New Hampshire accounted for the manufacture of the most firearm production of any state, with 1.2 million guns. New Hampshire manufactured the most rifles (328,000), many of which would be banned by the proposed legislation.