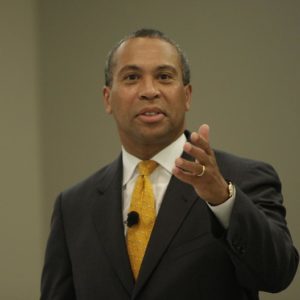 When Deval Patrick was a liberal darling making his political debut, he got a question every Massachusetts Democrat running for governor should expect: What about Willie Horton?

He didn’t handle it well.

Horton was the murderer serving life without the possibility of parole given a weekend furlough from prison by Gov. Mike Dukakis’ administration in 1986. Horton fled rather than return to prison, and he was later arrested after beating and tying up a Maryland man and forcing him to watch Horton rape his fiancée. The incident played a key role in Dukakis’ defeat at the hands of George H.W. Bush in 1988 and has become a political touchstone in Massachusetts politics.

“Would you have let Willie Horton out on furlough?” Patrick was asked during the 2006 campaign.

“I have no idea about Willie Horton’s background, history, what that furlough program is,” Patrick evaded.

“Should first-degree murderers be eligible for furloughs?”

“Let me try to be clearer,” Patrick responded, clearly annoyed. “The death penalty does not work. I believe in life without possibility of parole.”

Patrick turned what should have been a political softball (opposing furlough for murderers serving life sentences) into a strikeout. Under pressure from political allies, he later declared his opposition to setting incarcerated murderers and rapists free for a weekend out. And as a Democrat running in deep-blue Massachusetts, the issue wasn’t enough to derail his all-but-inevitable victory.

But the two-term Massachusetts governor’s fundamental political problem remains: Deval Patrick has been on the wrong side of several high-profile criminal cases — all involving rape — and all of which point to a soft-on-crime track record that doesn’t mesh well with Patrick’s newfound role as a “moderate” Democrat.

The most telling example is the Ben LaGuer case. Before entering politics, Patrick spent years as a champion of LaGuer, who was convicted of beating, raping and sodomizing a 59-year-old grandmother over an eight-hour period in 1983. Patrick didn’t just write letters urging the convicted rapist’s release. (“I receive a crushing volume of mail from prisoners all over this country. None of it is as thoughtful, insightful, eloquent, or humane as that I receive from Mr. LaGuer.”). He personally donated $5,000 to LaGuer’s defense fund to help pay for a DNA test to clear his name.

The result? The district attorney handling the case said the DNA proved LaGuer’s guilt “to a mathematical certainty.”

Once he became a political candidate, Patrick withdrew his support for LaGuer. But he continued to insist he was “proud” of his letter calling the convicted rapist “humane.”

Patrick’s relationship with another convicted rapist is more personal and politically problematic. In 1993, Patrick’s brother-in-law Bernard Sigh pled guilty to spousal rape of Patrick’s sister Rhonda and spent four months in a California prison. Eventually the couple reconciled and moved to Massachusetts, where state officials were divided over whether Sigh was required to register as a sex offender. Patrick insisted he did not.

In 2014, Patrick forced out two officials on the Sex Offender Registry Board, including the chairwoman, in retaliation for their failed efforts to force his brother-in-law to register. But in the end it didn’t matter: Sigh raped his estranged wife yet again in 2017 and is serving six to eight years in a Massachusetts prison.

Prosecutors wanted Patrick’s brother-in-law to face up to 22 years. “I am terrified at the thought of him being released,” Patrick’s sister said at Sigh’s sentencing hearing. “I would have to leave everything. … I would always be looking over my shoulder.”

They were overruled by the Massachusetts courts.

And then there’s the tragic case of veteran Woburn, MA police officer Jack Maguire, killed the day after Christmas 2011, during an armed robbery at a Kohl’s jewelry counter. Maguire’s killer wasn’t just a career criminal who’d been serving three concurrent life sentences when paroled by the Patrick administration, but he had also previously escaped once, and he used a previous furlough to launch yet another crime spree, shooting a security guard.

And yet he was still approved for parole, leaving a dead cop in his wake. The chairman of the Massachusetts Parole Board at the time? Deval Patrick’s former campaign driver.

It took three months of political pressure to get Patrick to push his appointees who made this deadly mistake off the board. In one sense, it wasn’t their fault. They were merely implementing the lenient policies Patrick endorsed. As the local public radio station reported: “In 1999, under Republican appointees, 13 percent of prisoners serving life sentences won parole on their first petition. Ten years later, under the Patrick administration, 32 percent of lifers won early release on the first try.”

Willie Horton’s story was devastating to Dukakis’ presidential hopes because it was a matter of policy, not merely a tragic incident. Americans couldn’t understand how a governor could ever support a program awarding weekend furloughs to murderers serving life sentences.

Patrick’s in a similar position. All of these cases raise questions about Patrick’s judgment, not a random court ruling or unfortunate error. He extended an amount of forgiveness to some of the worst criminals that Democratic primary voters are unlikely to extend to him.

It could be worse. In 2006, Ben LaGuer published a letter publicly endorsing Patrick for governor.

LaGuer has yet to pick a candidate for 2020.