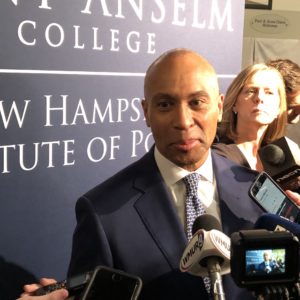 Deval Patrick Calls Rape of His Sister a ‘Relapse’

At a campaign stop in New Hampshire Monday, former Massachusetts Gov. Deval Patrick said he had no regrets about how he handled the case of his brother-in-law Bernard Sigh, a convicted rapist Patrick helped keep off his state’s sex offender registry, and he used the word “relapse” to describe Sigh’s subsequent rape of Patrick’s sister.

Patrick’s troubled record regarding sexual assault and crimes against women has come under renewed scrutiny since he entered the race for the White House two weeks ago. Even left-leaning media outlets like HuffPo and the Boston Globe have raised questions about Patrick’s actions in the Sigh case.

In 1993, Patrick’s brother-in-law pled guilty to spousal rape of Patrick’s sister Rhonda and spent four months in a California prison. Eventually, the couple reconciled and moved to Massachusetts. During the heat of the 2006 campaign, the Boston Herald broke the news of Sigh’s rape and the fact that he hadn’t registered as a sex offender.

In the heavily-Democratic Massachusetts, Patrick easily won the election despite the controversy. A hearing officer for the Sex Offender Registry Board later determined that Sigh wasn’t required to register as a sex offender because the state didn’t have a spousal rape law like the one he’d been convicted under in California.

Advocates for sexual-assault victims were outraged. “Have we not learned anything from the NFL?” victims’ advocate Laurie Myers said at the time.  “Rape is rape. It doesn’t matter if it’s your spouse or not. If the governor agrees with this, then he needs to personally apologize to every woman in the state.”

Two women on the Sex Offender Registry Board, chairwoman Saundra Edwards and executive director Jeanne Holmes, agreed. They tried to force Sigh to register. Instead, in 2014, Patrick kicked them off the board over their treatment of Sigh.

“That hearing did involve my brother-in-law, that is true. We’ve never made a secret of that, but it’s still inappropriate,” Patrick said at the time.

Three years later, Sigh raped Patrick’s sister yet again.   This past June he was sentenced to six to eight years in prison for rape and kidnapping.

“No, I don’t have any regrets,” Patrick told NHJournal on Monday at a campaign event at the New Hampshire Institute of Politics. “He brought a lot of pain to our family,” he said of Sigh, “but I also respect that at the time, he and my sister had a few decades of reconciliation,” Patrick said. “Obviously, that did not last.”

“I stuck up for him then because that was respectful of my sister and I think it was the right thing to do,” Patrick added.  As for the subsequent rape, Patrick said, “It turns out he has, at a minimum, relapsed.”

Patrick’s description of his sister’s rape as a “relapse” brought an immediate rebuke from Wendy Murphy, a former prosecutor who teaches sexual violence law at New England Law School in Massachusetts.

“That is such an insulting way to describe what rape is,” she told NHJournal. “Rape isn’t a disease or a medical issue, it’s an act of violence. Calling it a ‘relapse’ de-criminalizes the concept of rape, and it’s an attitude that contributes to the high rates of violence against women.”

Patrick’s problems with rape and sexual assault don’t end there.  Before becoming governor, he spent years advocating for convicted rapist Ben LaGuer, who spent eight hours brutally beating, raping and sodomizing a 59-year-old grandmother in 1983. Patrick donated $5,000 to help fund a DNA test, an effort that backfired when the test confirmed LaGuer’s guilt.

Asked about his advocacy on behalf of LaGeur today, Patrick blames a lack of information. “The record in the LaGuer case has developed. Hindsight is a great thing, but it’s not what I had,” he told NHJournal.

Unfortunately for Patrick’s “hindsight” argument, he described the rapist as “eloquent and thoughtful” during a TV appearance years after the DNA results.

The problem, according to Murphy, is that Patrick has a pro-perpetrator bias when it comes to crime in general, and crimes against women in particular. She points to his work to prevent potential employers from seeing the criminal records of some convicts in order to help them enter the workforce. Patrick had publicly promised that sex assaults would not be among the crimes kept under seal, but he eventually signed a law that sealed those records if, like his brother-in-law, the perpetrator was not required to register as a sex offender.

“If you care about crime against women, then don’t vote for Deval Patrick,” Murphy said. “He’s shown again and again he’s willing to work harder on behalf of sex offenders than the women they’ve victimized.”