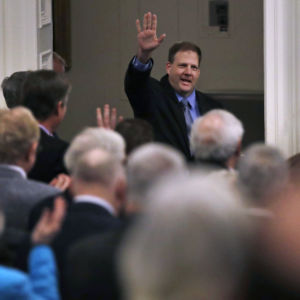 New Hampshire Gov. Chris Sununu waves as he arrives to address legislators at his budget address at the State House in Concord, N.H., Thursday, Feb. 9, 2017. Sununu presented his plan for the next two-year state budget, kicking off a months-long legislative process of perfecting the state's plan for how to spend its money. (AP Photo/Charles Krupa)
News

As expected, it didn’t take long for Democrats in New Hampshire to point out what proposals they didn’t like in Gov. Chris Sununu’s budget speech last week.

“I am encouraged by statements of Governor Sununu in support of full-day kindergarten and funding for the developmentally disabled, but as we all know, the devil is in the details,” said House Democratic Leader Steve Shurtleff in a statement. “The Governor’s budget address made no mention of the successful NH Health Protection Program, leaving serious unanswered questions for the 50,000 Granite Staters who rely on the program for their health care coverage.”

But the more divisive statements came from the Senate Democratic Caucus and New Hampshire Democratic Party (NHDP). While they applauded Sununu for keeping several initiatives put in place by former Gov. Maggie Hassan, they criticized him for not fully funding the Alcohol Fund to combat the opioid crisis.

“And in the midst of a substance abuse crisis, we need to find out why Governor Sununu chose not to fully fund the Alcohol Fund, which supports our effort to combat this crisis,” said Senate Minority Leader Jeff Woodburn in a statement.

NHDP Chairman Ray Buckley echoed Woodburn’s sentiments saying he was “disheartened to see that the governor did not fully fund the state’s alcohol fund, which would provide key resources to combat this epidemic.”

The Alcohol Abuse Prevention and Treatment Fund was created in 2000 by the Legislature, and it’s a mechanism that takes 5 percent of the gross profits from the sale of alcohol to support education, prevention, treatment, and recovery programs for alcohol and drugs. The fund has only been fully financed one time since its inception, which was in the 2003-2004 biennium — the first year it began. In his budget speech, Sununu proposed increasing the funds to 3.4 percent, double the 1.7 percent rate the previous budget had set.

In each budget after that, the governor or Legislature transferred the revenue to the general fund and only appropriated a small amount to the Alcohol Fund, which means Republican Gov. Craig Benson and Democratic Govs. John Lynch and Maggie Hassan suspended funding during their terms.

In the most recent budget, for the 2016-2017 budget biennium, Hassan and the House proposed suspending the funding formula. Hassan proposed giving the fund $9.6 million over the two-year period, but the Republican-controlled House dropped that figure to $3.6 million. Senators proposed bringing the formula back and lowering the cap to 1.7 percent, which would give the fund $6.7 million.

If the fund was fully financed for the whole biennium, it would have received approximately $19 million, still nearly $10 million less than what Hassan suggested. After the Senate put forward its recommendation for the budget, the NHDP called their budget “unbalanced and partisan” with “irresponsible gimmicks.”

It’s interesting that the NHDP would criticize Sununu for not fully funding the Alcohol Fund, when previous Democratic governors did not fully fund it either.

“We haven’t had a Democratic governor who has fought as hard as Sununu is fighting for it [the Alcohol Fund] right now,” said former state Rep. Joe Hannon, R-Lee, who made his mark in the Legislature by focusing on the opioid crisis.

“No one has taken the leadership on this, and the battle will be in the House and Senate Finance Committees,” he told NH Journal. “I’m always happy when the governor speaks about how he is addressing substance abuse treatment. He gets it, and that’s something I haven’t seen in awhile from leadership in the state.”

New Futures, a nonprofit group looking to curb substance abuse in the state, is a fervent supporter of fully funding the Alcohol Fund at 5 percent. They believe the money from the non-lapsing, flexible fund could be used for creative and innovative solutions to stop the opioid epidemic.

“We are encouraged by the fact that Gov. Sununu has increased the funding for the Alcohol Fund by doubling the current amount,” said Linda Paquette, president and CEO of New Futures. “However, we anxiously await the release of House Bill 2 in order to clarify the support in the budget for addressing New Hampshire’s substance abuse epidemic.”

Paquette said she was “very curious” what Sununu meant when he talked about “incentives” with the Alcohol Fund.

“First, I propose we double the Alcohol Fund, increasing these important resources by more than $3 million and creating incentives to ensure that those funds are truly spent,” he said in his Thursday speech.

Pacquette said she is hopeful that the Alcohol Fund will be a priority for the Republican-controlled State House because the funds are “not restricted.” New Hampshire is expected to receive federal money from grants and the 21st Century Cures Act, legislation approved by Congress and former President Barack Obama in December 2016, which gives $6.3 billion in funding to circumvent the opioid crisis and enhance medical research and development.

“The Alcohol Fund can be used to fill gaps where grant money and federal funds are restricted for certain uses,” Paquette told NH Journal. “It can be used for supporting recovery housing and investing in early childcare as a substance abuse prevention strategy. He [Sununu] clearly has made the opioid crisis a priority of his administration.”

“We’re going to double that fund and get the money where we can have a lot of impact,” he said in the meeting. “Not just in the high-density areas, but really all across the state. None of our communities have been immune to that.”

The Senate Finance Committee recommended passage of Senate Bill 196 on Tuesday, which was amended to increase the Alcohol Fund to the 3.4 percent rate proposed by Sununu. If the House changes the formula or suspends it in its budget recommendations, this bill could override it and fund it at the rate Sununu proposed.

“This is a sound proposal that I and a majority of the Senate Finance Committee supported today by recommending a bill to do just that,” said Senate Finance Chair Gary Daniels, R-Milford, in a statement. “We have established a number of initiatives that serve to stem substance abuse, including the heroin crisis, and I know we can do more with the funding Governor Sununu has proposed as part of his budget.”