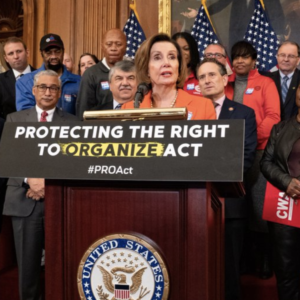 Congressional Democrats may have a slim, five-vote majority, but that hasn’t stopped them from passing big progressive legislation. After sending both the $1.9 trillion COVID-related spending package and the sweeping H.R. 1 “For The People” Act to the Senate, Democrats Tuesday night pushed through the PRO Act — a bill critics say overrides right-to-work laws in more than 25 states.

Both NH Democrats voted in favor of the bill, which picked up the support of five Republicans while losing just one Democrat (Rep. Henry Cuellar of Texas).

“Workers deserve the right to organize & advocate for their safety & wellbeing,” Rep. Annie Kuster tweeted. “The #PROAct returns power to the people by strengthening the federal laws that protect workers’ rights to join a union — I’m proud to cosponsor this legislation for working men & women across NH.”

“Heaven forbid we pass something that’s going to help the damn workers in the United States of America,” he declared from the House floor Tuesday. “If we were passing a tax cut here, you [Republicans] would all be getting in line to vote yes for it!

“Now stop talking about Dr. Seuss and start working with us on behalf of the American workers,” he told his GOP colleagues.

Opponents argue that, far from protecting workers’ rights, the PRO Act — “Protecting the Right to Organize Act of 2021” — actually strips workers who don’t want to join a union of basic freedoms, like the right to cast a secret ballot.

If passed, the PRO Act would force employers to turn over employees’ private information—including cell phone numbers and email addresses—to union organizers. It would also allow the imposition of “card check” elections, ending the secret ballot for votes to unionize. It’s an open invitation to bullying, corruption, and abuse, critics say.

“The PRO Act represents an unprecedented attack on the economy, particularly at a time when tens of thousands of small businesses have shuttered, millions more are struggling to keep their doors open, and workers are in desperate need of greater flexibility and opportunity to pursue work on their own terms and juggle multiple priorities,” Americans for Prosperity said in a statement. “Washington should do everything possible to make it easier for people to earn a living right now and after this crisis ends, but this bill does the opposite.”

Some dismiss concerns about expanding union power because union employment has already fallen so low. Just 6.2 percent of private-sector workers are members of a union, according to the Bureau of Labor Statistics, though one-third of government workers are.

However, AFP and other pro-business groups also warn the bill will impact millions of workers traditionally beyond the reach of unions by imposing California’s rules for individual contractors across the country.

“The PRO Act not only bans Right to Work laws nationwide, it also imposes the same independent contractor/freelancer-destroying policies of California’s AB5 law, which has destroyed countless lives and driven people out of the Golden State,” says John Kartch of Americans for Tax Reform.

“That law,” writes the Wall Street Journal, “narrows the definition of an ‘independent contractor’ who is free from union coercion. A nationwide ABC test would destroy the growth and flexibility of the gig economy, dragging everyone from tech workers to freelance reporters to Uber drivers into union hands.”

The measure now faces a near-certain Senate filibuster, though it will have the support of both NH senators. Jeanne Shaheen and Maggie Hassan are also co-sponsors of the bill.