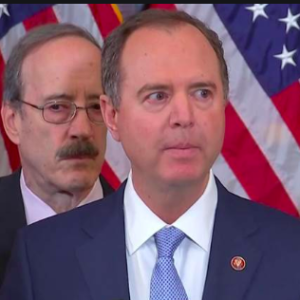 The Democrats’ impeachment strategy has taken yet another bizarre twist, this one leading most observers to the incontrovertible conclusion that the Gang of Three — Nancy Pelosi, Adam Schiff and Jerry Nadler – need to re-read the US Constitution.

And that’s ironic, considering they refer to that sacred document every time they try to make their case against the President. In truth, admonishing them to re-read the Constitution is fruitless; how can they re-read it when they keep turning it upside down?

They claim they’re compelled to pursue impeachment to fulfill their constitutional duties and to protect the Constitution. In fact, the Pelosi-Schiff-Nadler impeachment freight train is a raw power grab intent on obliterating established constitutional rights and separation of powers.

They wrongly imply that Congress’ constitutional power of impeachment renders all other constitutional rights – in this case, the rights of the President and his aides – meaningless.

Pelosi laments the time it would take for the President and others to seek redress in court, yet that is their constitutional right under the First Amendment. Therefore, pursuing Articles of Impeachment to undermine that right is in fact an attack on the Constitution.

Schiff’s threats to charge witnesses and the President with obstruction of justice and obstruction of Congress if they don’t respond to his subpoenas to appear before his committee are in fact witness intimidation and witness tampering, both criminal acts.

Even liberal George Washington University Law School Professor Jonathan Turley pointed out in his recent testimony before the House Judiciary Committee: Congress is abusing its power by moving forward with impeachment without allowing the administration to seek legal recourse in resisting congressional subpoenas.

“If you make a high crime and misdemeanor out of going to the courts, it is an abuse of power. It’s your abuse of power,” Turley testified.

Constitutional power of impeachment does not bestow upon Pelosi, Schiff and Nadler the right to interpret the Constitution — that power is vested in the co-equal Judicial branch of government and it does not render the Bill of Rights invalid, including the President’s and others’ right to petition the government for redress of grievances.

The courts would have no role in safeguarding those rights since, according to the Pelosi-Schiff-Nadler version of the Constitution, the power of impeachment grants Congress the power to interpret law. The Constitution itself specifically says the opposite: the job of interpreting the Constitution belongs to the courts.

Our legal foundations are being cut out from under us while we watch this spectacle. The President has not been able to call any witnesses, his own lawyers are barred from the process and so they’ve been prohibited from cross-examining witnesses.

Additionally, and perhaps most importantly, he has not been allowed to face his accuser. This all started with a faceless, nameless person known as “the whistleblower” whose identity has been kept secret by Schiff, Pelosi and Nadler. If you contest a traffic ticket in court and the police officer – your accuser – doesn’t show up, you’re free to go and don’t have to pay that ticket.

That’s how it works under the rule of law. The chief law in our country is the Constitution and it’s Schiff, Pelosi and Nadler who are ignoring its protections in their bloodlust to destroy President Trump.