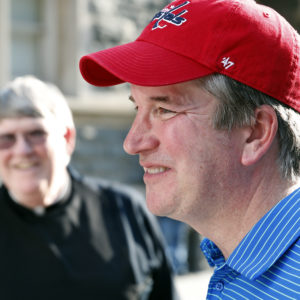 With President Trump’s nomination of Justice Brett Kavanaugh to the Supreme Court, another round of “SCOTUS Pinata” is underway.  Kavanaugh, a DC Circuit Appeals Court Judge,  is certainly qualified for the job.  Democrats, however, are so desperate to score points with their radical left base that they are literally throwing everything but the kitchen sink at him. And the only reason Sen. Chuck Schumer isn’t throwing the sink is because they aren’t holding the hearings in a Home Depot.

Just look at the so-called criticism lobbed at Judge Kavanaugh by the left – he likes beer and burgers. He is a big fan of our national pastime and spends a lot of money on tickets to see the Washington Nationals play.  NARAL, an extreme pro-choice organization that advocates for legal abortion until the moment of birth, even mocked his name, suggesting that “Brett” is a frat-boy name. Seriously. They called him a frat boy. Ooooh. Good one.

What are these theatrics all about?

For starters, the great baseball ticket scandal is rooted in Kavanaugh’s financial disclosure forms, which show debt in the tens of thousands of dollars on a couple of credit cards and a loan.  Apparently, some of that was spent on tickets for the ballpark.  Financial disclosure forms show an individual’s income and debt in ranges, so you can’t even make an accurate guess as to how much he spent on tickets, or anything else for that matter.

The real question is, who cares?  There is no suggestion that the judge has done anything wrong, illegal or even financially irresponsible. These are just silly attacks by desperate people trying to undermine a qualified candidate.

The Huffington Post is all hot and bothered over the coverage of Kavanaugh as a great Dad and an enthusiastic basketball coach calling references to these traits “shameless.”  This in spite of the fawning coverage of President Obama as a great Dad and how his experience as the father of two girls made him more sensitive and understanding of the world.  The Left needs to hold down their skirts – their hypocrisy is showing

There are 10 Democrat Senators up for re-election from states where Donald Trump won in 2016.  There’s practically no chance of the Democrats winning back a majority in the Senate if even one of these senators loses their seat.  These red-state Democrats are put in a tough spot by this nomination, especially as Kavanaugh’s confirmation hearings are likely to take place right in the middle of the general election.  In the Kavanaugh fight they must choose between appeasing their Republican states by voting for the nominee or voting with their party against Kavanaugh and risk being tainted as an obstructionist by their GOP opponents.  Either way, it’s a risk they would rather not have to take in an election year.

As reported in the NY Times last week, here is the heart of why Schumer and the rest of the Democrats in leadership are so wound up over all of this:

“A decision by one or all of them [red-state Democratic senators] to try to bolster their standing with Republican-leaning voters in their states by backing the president’s nominee would undermine Democratic leaders as they try to sustain party unity. And if their votes put the president’s choice on the court, it could hasten the move to the left by the party’s aggressive activist core, while intensifying the clamor for new, more confrontational leadership.”

Like everything else in Washington, it’s about power.  The establishment wing of the Democratic party fears that they are on the verge of losing what little power they have to the even more extreme democratic-socialists who are steadily taking over the party

The bottom line?   Democrats would have opposed any nominee, regardless of their qualifications, Republicans have the votes, Kavanaugh will eventually be confirmed to the Supreme Court, and everything that happens between now and then is just political theatre intended to help establishment Democrats keep a hold onto the reins of power within their party.