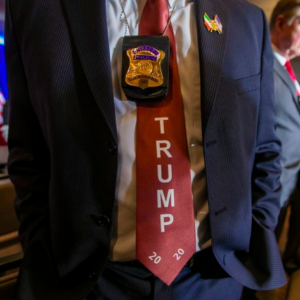 Democrats Are Handing Trump The ‘Law and Order’ Issue. Is That Smart Politics?

Michael Bloomberg had to be smiling when he saw the returns from Dixville Notch — American’s most famous election precinct — showing that he had the support of three of the five midnight voters with write-ins on both the Democratic (2) and Republican (1) ballots.

Actually, Bloomberg would have been smiling if not for another story — the leak of audio from a speech he gave at the Aspen Institute in 2015, in which he addressed the challenge of crime in minority neighborhoods and his “stop-and-frisk” approach.

“Controversial, but, first thing is…95 percent of your murders and murderers and murder victims fit one M.O., You can just take the description and Xerox it and pass it out to all the cops. They are male minorities 15 to 25,” he said. “That’s true in New York, that’s true in virtually every city in America. And that’s where the real crime is. You’ve got to get the guns out of the hands of the people that are getting killed.”

“The first thing you can do to help that group is keep people alive,” Bloomberg added.

The release of this audio on the day of the N.H. primary is viewed as an attack from one of Bloomberg’s fellow Democrats worried about his cash-powered rise in the polls. And “stop-and-frisk” is a legit issue for political debate with understandable resonance among voters of color.

The flip side, however, was seen in Portsmouth on Monday, when former U.S. senator and moderate Republican Kelly Ayotte and Gov. Chris Sununu joined Vice President Mike Pence for a “Cops for Trump” event. Ayotte is hardly a Trump booster, but the law-and-order issue is a good umbrella for them both.

And one of the biggest applause line at Monday night’s Manchester rally was Pence’s: “Cops are for Trump because Trump’s for cops!” So many off-duty cops were at Trump’s rally — may sporting “Cops for Trump” T-shirts — that a security worker for the SNHU arena was overheard by NHJournal saying: “This is the easiest event we’ve ever had. There are cops everywhere!”

Yes, the #BlackLivesMatter movement has made policing and allegations of racist police policies a front-and-center issue, but most Americans still like cops. The latest Gallup poll shows that the police, along with the military, are one of the most trusted institutions in the U.S.

Whoever the Democrats nominate to take on Trump in November, do they really want to concede the law-and-order issue to Trump? Is that a smart strategy for winning states like Pennsylvania, Michigan and New Hampshire?