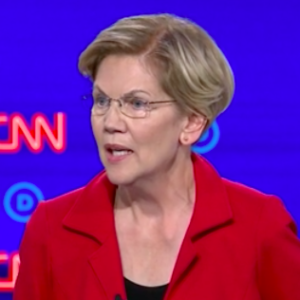 “I give the credit to Donald Trump,” Rep. Ro Khanna (D-Calif.) said last week. “No one was capable of unifying our party more than the president.”

Unfortunately for the Democrats, Trump wasn’t on stage at Tuesday night’s debates. Instead, the civil war roiling the Democratic Party took center stage as moderate candidates like former Maryland Rep. John Delaney, Gov. Scott Bullock of Montana and Ohio’s Rep. Tim Ryan took on progressives Sens. Elizabeth Warren, Bernie Sanders and Mayor Pete Buttigieg, over what they say are extreme policy proposals that will push independent voters into the arms of President Trump.

On issues from health care to immigration to trade, the progressives pledged massive government regulations and taxpayer-funded benefits, while the more moderate candidates raised questions about how much these ideas would cost or if they were too far left for voters to accept.

“The moderates came out swinging at Senators Warren and Sanders — as expected — but I don’t think they managed to land any solid punches,” Democratic strategist Lynda Tran of 270 Strategies told InsideSources. “It was a substantive and spirited exchange on health care in particular, but we can anticipate the front runners to maintain their lead over the lesser-known folks who will be hard-pressed to make it to the September debate stage.”

The three progressives received the most speaking time–they spoke about as much as the other seven candidates combined–in part because they were under constant challenge from Delaney, Bullock and the others. After being called out yet again by Delaney for what he called “impossible promises,” the Massachusetts Democrat replied:

“I don’t understand why anybody goes to all the trouble of running for president of the United States just to talk about what we really can’t do and shouldn’t fight for.”

It inspired a cheer from the studio audience, but it didn’t change the fact that Warren didn’t offer any concrete answers as to how to pay for her many plans for “free everything” or respond to criticism of her proposals on trade, student loan debt and healthcare.

Nor did it change polling that shows proposals like Medicare For All’s shutdown of private health care, or reparations for slavery, or health care for illegal immigrants are unpopular with voters.

Instead, both Sanders and Warren fell back to accusing their questioners of using “Republican talking points.” When CNN’s Jake Tapper asked Sanders if he would raise taxes on the middle class to pay for Medicare For All, Sanders said, “What I am talking about and others up here are talking about is no deductibles and no co-payments and Jake, your question is a Republican talking point.”

Candidates like Delaney and former Colorado Gov. John Hickenlooper may be out of step with the Democratic primary electorate (they are certainly all-but-invisible in the polls), but some observers believe their presence helped the entire party appear more centrist. “The combination of Ryan, Bullock, Delaney, and [Sen. Amy] Klobuchar is making the Democratic Party look more reasonable than it did in June debates,” conservative commentator Mona Charen tweeted during the debate.

Others predicted the opposite effect. The fact that knowledgeable, common-sense moderates like Delaney, Bullock, etc are viewed as non-starters for the Democratic Party could signal to independent voters that they’re not welcome, either.

Bruce Mehlman, a political strategist at the DC firm of Mehlman Castagnetti Rosen & Thomas, told InsideSources that “the Democratic civil war has been on display for a while now.”

“It’s the Biden vs. the Warren/Sanders wing, it’s in [House Speaker Nancy] Pelosi vs. the Squad. Democrats are unified in their desire to beat Donald Trump, but as soon as you get past that, they’re very divided on issues like Medicare For All and the Green New Deal.

“At its most broad, their debate is over whether capitalism is a system that still works but needs to be tweaked or whether its time has come and gone.”