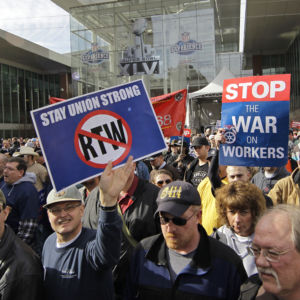 Following the 2018 Supreme Court Janus decision that essentially enacted “right to work” for public sector employees, New Hampshire Republicans hope to follow up with state legislation allowing the same for private-sector employees. The decades-long battle resumes Tuesday in the Senate when it takes up the measure again. The closest the bill came to passing was a decade ago, when Governor Lynch’s veto was nearly overridden – failing by just six votes.

The landmark Janus v. AFSCME (American Federation of State, County, and Municipal Employees) case ruled that forced union fees in the public sector violated the First Amendment right to free speech. Legislation in twenty-seven states extends that right to private-sector unions, and nine of those states have amended their constitutions to recognize the right.

State Sen. John Reagan (R-Deerfield) is the prime sponsor of Senate Bill 61, 2021’s right to work legislation, and he is hopeful this is the year it will finally pass in the Granite State.

“The numbers are there to pass,” Reagan tells NHJournal. “the will to follow the Republican line may not be.”

In 2011, Republicans held a super-majority in the New Hampshire House and Senate, but the veto override failed when 40 Republicans voted against it. In 2018, similar legislation failed with 33 Republicans voting against the measure.

This year, Republicans hold a present majority of 212 to 186 in the house. If thirteen members go against the bill, it will fail in the House, assuming it passes the 14-10 GOP-led Senate.

Greg Moore from AFP-NH calls the bill a win-win for New Hampshire. “It would offer better protection for those workers who choose not to join a union while giving our economy a major boost for quality, high-paying jobs, particularly in the manufacturing sector.

Opponents say it’s unfair for those who don’t pay dues to reap the benefits of collective bargaining the union performs. The movement is “another attempt by the anti-union wing of the New Hampshire legislature to undermine the existence of organized labor in the Granite State,” the AFL-CIO NH said in a statement during 2016’s right to work battle.

“The true intent of [right to work] is to weaken the collective voice of New Hampshire workers who benefit from representation by a labor union,” Glenn Brackett, AFL-CIO NH President said.

But right-to-work proponents see it differently. “Currently in New Hampshire, some 33,500 workers are under the yoke of compulsory unionism. Of course, all of the rest of us suffer as well due to the economic damage that this disastrous policy causes,” McKayne Boedeker, Executive Director for New England Citizens for Right to Work, told NHJournal.

“Right to work is about freedom and jobs. No Granite Stater should be compelled to give money to a private organization they disagree with,” Boedeker said. “Right to Work states outperformed New Hampshire in job creation by a two-to-one margin over the last decade.”

Boedeker acknowledged that with a slim majority, this legislation is a tough lift. “It’s critical Right to Work supporters across the state make sure their legislators know how important this issue is,” he said. “There are enough legislators in play to shift the tide either way.”

The AFL-CIO NH President, Glenn Brackett, did not respond to multiple requests for comment.