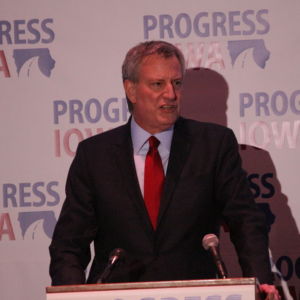 Mayor Bill de Blasio recently joined the crowded field of Democrats vying for the party’s presidential nomination – and he’s done so by touting his progressive bona fides on the national campaign trail. But back at home, de Blasio is pushing a regressive proposal to spend billions on building new jails in New York City, rather than using that money to fix the real problems that plagued the city’s notorious Rikers Island.

The controversial proposal and its lack of public accountability shows the mayor’s true colors when it comes to criminal justice reform – and they are not pretty. Voters should beware.

The 10-year, multi-billion-dollar proposal was included in de Blasio’s executive budget for 2020, with plans to construct four publicly-funded borough-based jails – each with approximately 1,500 beds – on sites in Mott Haven in the South Bronx, Boerum Hill in Brooklyn, Kew Gardens in Queens and Chinatown/Tribeca in Manhattan.

But this plan devotes no resources to building communities, strengthening diversion programs, or reforming the leadership of the city’s dysfunctional Department of Correction which oversaw the violence, mismanagement and corruption that has plagued Rikers for decades.

The Mayor’s plan is currently going through New York City’s ULURP process for land use approval, which will include feedback from each borough president and will ultimately be decided by a vote in the City Council. And since the start of that process, all four of the local community boards in areas affected by the plan have voted to oppose it.

The bottom line here is if Mayor de Blasio is going to spend billions in taxpayer funds on this issue, New Yorkers want that money to be spent on a real progressive plan for criminal justice reform. We don’t want massive new jails that will just become new breeding grounds for the same human rights abuses seen at Rikers.

Let’s remember what we’re dealing with here. It was recently reported that there is significant undercounting of violent incidents at New York City jails, based on a report by the Department of Investigation report. Further, a 2017 court-ordered report outlined the relationship between people incarcerated and officers at Rikers, and its findings indicate that officers “relish confrontation” with people incarcerated, which explains why violence has increased despite a decrease in number of people incarcerated and an increase in officers. What is wrong with Riker’s has little to do with facilities, but much to do with the regressive policies that the Mayor and the leadership of the Department of Correction have been implementing for years.

Mayor de Blasio now finds himself at a crossroads, as he promotes a progressive message to a national audience while trying to advance regressive policies in New York City. Instead of doubling down on his deeply problematic proposal for new jails, he should reverse course, listen to concerns of his electorate, and develop a real plan to invest in providing alternatives to incarceration for pre-trial detainees, supporting mental health and drug use treatment programs, ensuring speedy trials, and fixing the systemic leadership problems at the Department of Correction.

Only then could he honestly position himself as the progressive presidential candidate that Democrats nationwide would be willing to support.