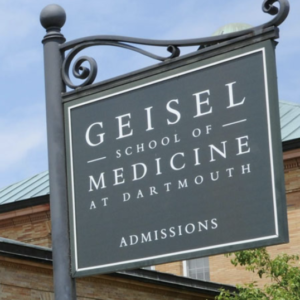 Dartmouth Warned Over Due Process for Med Students

In the wake of an ongoing scandal over alleged mistreatment of students, the Geisel School of Medicine at Dartmouth College has hidden its due process policies behind an online firewall, a watchdog organization says.

The school has been under steady criticism since it expelled a handful of students after accusing 20 of cheating on an online exam. According to FIRE, a free speech non-profit that frequently advocates on behalf of students, the evidence used by Dartmouth does not stand up to scrutiny.

“Had Dartmouth conducted a trustworthy process for adjudicating alleged misconduct, it could have rooted out suspected cheaters with confidence. Instead, because of due process failings, Dartmouth finds itself mired in a controversy of its own making,” said Alex Morey, the program officer for the Foundation for Individual Rights in Education, or FIRE.

Morey sent a letter to Gisele’s administration demanding to know why the school withheld complete data on the alleged cheating from the accused, many of whom had just 48 hours to prepare a defense.

“Why is Geisel unwilling or unable to provide the evidence that would give an accurate picture of what actually transpired?” Morey said.

FIRE did its own analysis, along with technicians from the Electronic Frontier Foundation, and found the evidence used against the students faulty, a view supported by recent New York Times reporting.

The school uses an app called Canvas to store lectures and other study materials that students frequently access. When students were taking remote exams this year, the exam program was supposed to lock the students out of other applications. However, Geisel reportedly found evidence that students were accessing the Canvas app during the exams.

According to the EEF and FIRE joint letter, this is a misunderstanding of the data, as the Canvas app will operate in the background even if it is not in active use.

“EFF’s research indicates that any device through which a student is logged into the e-curriculum platform will continue to make connections to that platform using automatic syncing,” wrote EFF’s Senior Staff Technologist Cooper Quintin.

As questions are raised about the school’s handling of the scandal, Geisel has put the due process policies for students accused of wrongdoing behind an online password, blocking people from viewing the policies, according to Morey.

“Of course, doing so conveniently hides them from the scrutiny of the public and prospective students who might be curious whether they will have rights — and what those rights might be — if they matriculate at Dartmouth,” Morey said.

Morey said FIRE wants the school to commit to basic fairness, and implement policies that give students accused of wronging safeguards against a potentially unfair process. These safeguards include getting full disclosure of the evidence, time to prepare a defense, and resources to make a case for themselves. Morey also said students need to be given the presumption of innocence in these cases. FIRE is giving Dartmouth until May 21 to respond.