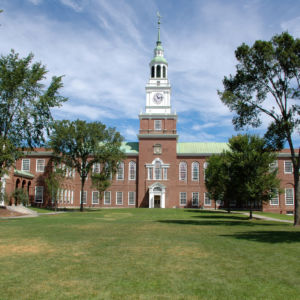 Dartmouth College joined 16 other leading universities in a legal challenge to President Donald Trump’s immigration executive order, arguing that the travel ban has “damaging effects” on its research capabilities and is preventing them from recruiting and educating the world’s best talent.

The amicus brief was filed Monday in the U.S. District Court for the Eastern District of New York, supporting a civil action brought by the attorney general of New York and several colleges including, Brown University. Columbia University, Massachusetts Institute of Technology, Harvard University, Duke University, and others.

The controversial executive order was one of the first actions Trump took since his inauguration in January. He has vowed to keep radical Islamic terrorism out of the United States and he signed the order last month creating a temporary ban on allowing people to enter the country from Iran, Iraq, Libya Somalia, Sudan, Syria, and Yemen, as well as a temporary suspension on allowing refugees into the country.

Supporters of the ban agree with the stricter vetting of immigrants coming into the United States and a tightening of borders. Opponents say the ban is nothing more than a religious test, as Trump tries to keep Muslims out of the country.

Lawsuits attempting to block the ban were quickly filed and a federal appeals court upheld a hold on the order last week, allowing for people to enter the United States who were previously blocked. Trump’s team said they were still weighing their legal options as they work to put the order back in place.

Some of the biggest news stories when Trump’s order was in place were from college campuses. For many students, faculty, and staff, their semester was just starting when Trump signed the order, leaving many academics from the seven-banned questions to worry if they would be able to return to their studies.

“Dartmouth College counts among its core values embracing diversity with the knowledge that it significantly enhances the quality of a Dartmouth education, as well as fostering lasting bonds among faculty, staff, and students, which encourage a culture of integrity, self-reliance, and collegiality and instill a sense of responsibility for each other and for the broader world,” the college said in the brief.

In the brief, the colleges argue that the order deters international students, faculty, and scholars from studying at American institutions.

The college also pointed to notable foreign leaders and diplomats among its alumni, including Kul Gautam, a citizen of Nepal and the former Assistant Secretary General of the United Nations, Paavo Lipponen, the former Prime Minister of Finland, and Gordon Campbell, the former Premier of British Columbia.

The brief argued that the order would “impede successful academic collaboration” in the United States. Since thousands of conferences and symposia are held at universities every year, they have become “incubators for innovation and thrive on the free flow of information and ideas.”

“A faculty member at Dartmouth planning a conference for next fall has expressed concern that participants may not be able or willing to travel to the United States, and one keynote speaker wonders whether it ‘sends the wrong message’ to attend a conference in the U.S. at this time,” the brief states.

Dartmouth has been one of the leading academic institutions offering resistance to some of Trump’s immigration policies.

College President Phil Hanlon and nearly 50 other college and university presidents sent Trump a letter on February 2, after he signed his order, asking him to “rectify or rescind” it.

“The order specifically prevents talented, law-abiding students and scholars from the affected regions from reaching our campuses,” the letter states. “American higher education has benefited tremendously from this country’s long history of embracing immigrants from around the world.”

In a campus-wide email sent on January 29, Hanlon advised students affected by the seven-nation ban to avoid all international travel.

In November 2016, Hanlon signed a statement in support of the Deferred Action for Childhood Arrivals Programs — a program where more than 700,000 undocumented immigrants who were brought to the United States illegally obtained temporary relief from deportation.

Dartmouth students were concerned after Trump was elected that he would overturn former President Barack Obama’s executive order creating the program, so they started an online petition asking for Dartmouth College to become a “sanctuary” school for undocumented students. University officials pledged to protect and support those students “within the bounds of the law.”

It remains to be seen what will happen as a result of the brief filed by the colleges opposing the executive order, but university officials believe that “safety and security concerns can be addressed in a manner that is consistent with the values America has always stood for, including the free flow of ideas and people across borders and the welcoming of immigrants to our universities.”