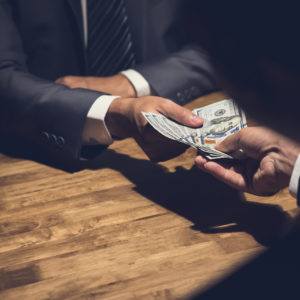 What you won’t know—and probably never will—is who put up the $5 million to pay for the attack ads. Who’s writing the checks to keep a Supreme Court nominee off the bench?

Welcome to the world of “Dark Money” politics—which Democrats simultaneously decry and embrace.

Take Sen. Elizabeth Warren, for example. She’s often complained that “Right-wing billionaires are pouring buckets of dark money” into political campaigns.  “One of the principal tools rich and powerful people use is dark money,” Sen. Liz Warren said in April. “They have created an evasive enemy that slithers out of sight, with only a glimpse here or there.”

Yet she’s one of the senators working with Demand Justice to try and block Kavanaugh’s confirmation. In fact, Warren has met with–and taken money from— “dark money” organizations like Democracy Alliance, who use millions from anonymous donors to promote Democratic causes.

And hours before President Trump announced he was nominating Judge Brett Kavanaugh for the Supreme Court, Sen. Chuck Schumer was already bemoaning “the influence of dark money in our politics.”

Liberals love attacking the Supreme Court’s Citizens United ruling that rolled back restrictions of campaign funding and made the current system possible. The media love the “campaign finance” issue, too. In fact, you’ve probably seen a story on CNN or MSNBC about the Judicial Crisis Network, a conservative organization advocating Kavanaugh’s confirmation.

But chances are you’ve seen or heard little about their liberal counterpart, Demand Justice, or the complex, layered funding system it’s using to keep its donors secret.

Not that they’re breaking the law.  Demand Justice has set itself up as a so-called “social welfare organization,” or 501(c)(4), and they are allowed to advocate for causes under certain limits. For example, politics has to be less than half of what the organization does. As long as they obey the rules, they can raise money, run ads, and never reveal their donors.

The irony is that progressive groups are using Judge Kavanaugh’s jurisprudence—because money can be used to pay for political speech (TV ads, websites, etc) it should be given First Amendment protections similar to speech—to raise these off-the-record millions to attack him.

Not only that, but Demand Justice in particular has a complicated pedigree.  Demand Justice is essentially a front for yet another “dark money” organization—a tax-exempt social welfare organization called the Sixteen Thirty Fund that is acting as Demand Justice’s fiscal sponsor. “Donors who steer money to Demand Justice would report donations to the fiscal sponsor rather than Demand Justice itself, adding an extra layer of secrecy that further obscures the source of funds,” says the Center for Responsive Politics.  This system allows Demand Justice to avoid filing a nonprofit 990 tax return, so there will be virtually no formal record of their activities opposing Kavanaugh.

So liberal millionaires and far-Left activists give money to the Sixteen Thirty Fund, which in turn uses that money to fund Demand Justice, which uses that money to buy TV ads to influence swing votes in the U.S. Senate in an attempt to stop a democratically-elected president from filling a vacancy on the Supreme Court—all with money from undisclosed sources.

And all the while, Schumer and Warren are attacking Kavanaugh for his defense of free speech that makes this “dark money” funding possible.

Once again, both sides use the current campaign finance system to advance their cause. Beth Kanter, a spokesperson for the Sixteen Thirty Fund umbrella group, insisted to the AP that they “strictly follows all laws.”

In a less than forthcoming op-ed for USA Today, Fallon defended Demand Justice’s “dark money” by saying “thousands of grassroots donors have invested in our fight to save our courts from Trump. The average online donation is just $30.”  What the former Hillary advisor fails to mention is that their “fiscal sponsor,” the Sixteen Thirty Fund, listed 60 donors on their most recent tax return who, according to the AP, donated $21 million in contributions of up to $7.3 million.

“We have a diverse set of donors that share our commitment to social justice,” Kanter said.

Maybe. Maybe not.  We’ll never know. What we do know is that they’re millionaires and billionaires who want to make an impact on the political process.