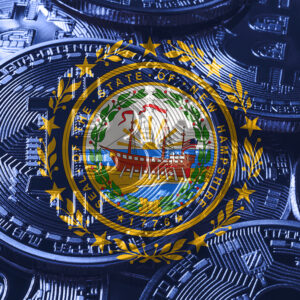 BlockFi, headquartered in Jersey City, New Jersey, pulled its application to open a new trust company from the New Hampshire Banking Commission’s docket earlier this month. The company declined to answer questions about the application, first filed in April, and instead sent NH Journal a statement without attribution:

“We welcome discussions with regulators and believe that appropriate regulation of this industry is key to its future success. As part of our engagement with regulators, BlockFi applied to the New Hampshire Banking Department for a license to open a new trust company. We recently withdrew this application and will revisit it at a later date once we have resolved regulatory clarity in the space.”

New Hampshire Bank Commissioner Gerald Little said he was not at liberty to discuss any individual application, but said he is unaware of any New Hampshire regulations that would have stalled BlockFi’s application.

“In conversations, we’ve encouraged them to refile,” Little said.

Meanwhile, the company is coming under scrutiny because of its financial practices in its home state of New Jersey.

BlockFi is taking heat from New Jersey regulators over its interest-bearing accounts. New Jersey’s Bureau of Securities issued a cease and desist order against the company in July, stating that BlockFi’s accounts were not registered with that office or exempt from registration.

BlockFi offers BlockFi Interest Accounts, or BIAs, with yields from 0.25 percent to 7.5 percent. The cease and desist order states that these accounts, which generated close to $15 billion for BlockFi, are unregistered securities that are not backed by Securities Investor Protection Corporation (the SIPC) or insured by the Federal Deposit Insurance Corporation (the FDIC).

“The BIAs are subject to additional risk, compared to assets held at SIPC member broker-dealers, or assets held at banks and savings associations, almost all of which carry FDIC insurance. Nor are they registered with the Bureau or any other securities regulatory authority, or exempt from registration. Despite the additional risk, and lack of safeguards and regulatory oversight, as of March 31, 2021, BlockFi held the equivalent of $14.7 billion from the sale of these unregistered securities in violation of the Securities Law,” the cease and desist order states.

In General, New Hampshire has few regulations when it comes to cryptocurrencies like Bitcoin, Dogecoin, Ethereum, and many other forms of digital money.

The state of New Hampshire does not get involved in people trading cryptocurrencies among themselves. But that changes when they start exchanging the cryptos for cash.

“The only time they come onto our radar screen is if they marry cryptocurrency with (paper) fiat currency,” he said.

BlockFi’s services include trading crypto, as well setting up interest-bearing accounts, money lending, and credit cards. Since BlockFi offers a mix of crypto to crypto, and crypto to fiat business, it would be regulated like a bank in some ways, and unregulated like a cryptocurrency in other ways. Little said that any crypto bank would also be subject to all of the federal banking laws and anti-money laundering requirements, even if they did not fall under any state regulations.

State Rep. Keith Ammon, R-New Boston, said BlockFi coming to New Hampshire could be huge, if it happens, and the state needs to clear up its regulations to help crypto financial service companies come to the Granite State.

“If BlockFi was here, other crypto service companies would follow suit,” he said. “We need to play catch-up.”

Ammon said cryptocurrency is the future of finance, and New Hampshire is going to find itself losing out if it doesn’t act. The city of Miami recently unveiled its own cryptocurrency, MiamiCoin, that will help fund public works projects. New York mayoral candidate Eric Adams, who is expected to win his race, has said he wants to make New York a Bitcoin and crypto-friendly city. The Central American nation of El Salvador recently adopted BitCoin as legal tender.

“It’s become a s**t-ton of capital, and it goes where it’s welcome. There’s going to be a competition for making an environment that draws it in. We shouldn’t be last to do this,” Ammon said.

New Hampshire used to be at the center of Bitcoin and cryptocurrency, thanks largely to the Free State Project. Libertarian activists like Ian Freeman helped make the currency popular in the state. Freeman got businesses in and around his Keene home base to accept Bitcoin, and he helped set up Bitcoin ATMs. Bitcoin is losing its outlaw chic, as Freeman sees more big-money investors getting involved in cryptocurrencies.

“I don’t think they can ignore it anymore,” Freeman said.

Freeman used to preach about BitCoin’s ability to undermine the government and empower the individual. It was the best investment of the last 10 years, and banks and investors took notice, Freeman said. While BitCoin used to be a way to protect money from the government and the financial system, according to Freeman, it is now going to be a big part of both.

“The institutional investor-class, they are the ones who want to cozy up to the government,” Freeman said. “No one wants the government to smash their windows and doors in at six o’clock in the morning.”

Freeman and five other people were arrested by federal law enforcement during March raids. They are all currently under federal indictment for wire fraud and money laundering. Federal investigators allege Freeman used his business to launder the proceeds of internet scams, among other alleged crimes. Freeman and the others deny wrongdoing.

Ammon plans to file legislation to make it easier for legitimate crypto-financial companies like BlockFi to operate in New Hampshire. Past attempts to streamline the rules for crypto have failed in the House and Senate, largely because of a generation gap among members, he said. That’s hopefully changing as the currencies become more mainstream.

“It was very difficult to try and explain it back then,” Ammon said. “But now, it has become a new market that is competing with the stock market,” Ammon said.