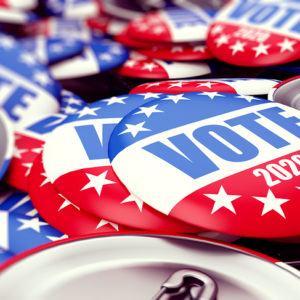 Counterpoint: As Previous Generations Did, Make a Plan to Vote

Editor’s Note: For another viewpoint, see Point: Presidential Election Is a Battle Between Good and Evil

The right to vote is one of our most cherished fundamental rights. It is guaranteed by more parts of the Constitution than any other right. It is the linchpin of our democracy. But securing the right to vote has never been easy. We all must do the work necessary to make our Constitution’s promise of a vibrant democracy real.

At a moment when the nation is contending with a deadly pandemic, and when President Donald Trump is waging a war on mail-in voting unlike any we have seen in our lifetime, claiming that the only way he could possibly lose is because  of a rigged election, it is critical for each of us to have a plan in order to ensure that our vote is properly cast and counted.

Voter  suppression by conservatives, efforts to cripple the Postal Service’s ability to transport absentee ballots on a timely basis, voting misinformation (which is at an all-time high thanks in part to all the president’s attacks on voting by mail), unbelievably long  lines at polling places, and, of course, the risk of transmission of COVID, make this a necessity. In a very real sense, the integrity of our democracy is at stake in this election.

Making a voting plan is nothing new. In past years, long lines at the polls have forced Americans to figure out how they will find extra hours during a busy working day to wait for hours to cast a ballot.

Throughout history, we have seen Americans, particularly in communities of color, forced to go to extremes to make a plan to ensure they could exercise the right to participate in our democracy. For example, during Reconstruction, Black Americans acted collectively to make their way to the polls, often armed for self-defense, in order to exercise their constitutional right to vote as guaranteed by the 15th Amendment.

With white  mobs actively seeking to massacre those who sought to participate in our democracy, getting to the polling place without being subjected to Klan violence required careful planning and organization. At times in our nation’s history, that meant swimming,  rather than walking, to the polls. Black Americans know all too well the sacrifices their ancestors made to ensure that their votes would be counted.

The barriers to voting we face in 2020 are unquestionably different, but the basic idea is the same: we all need to make every effort to ensure that our democracy exists not only on paper but in reality. We need to demand that our votes are cast and counted in what is shaping up to be one of the most important elections of our lifetimes.

If you live in a jurisdiction that allows early voting, vote as early as you can. If you  have an absentee ballot, use dropboxes if they are provided in your community, rather than depending on the Postal Service. That can help flatten  the absentee ballot curve, lessen the burden on over-taxed voting administrators, and ensure you take no chances that your mail-in ballot arrives too late to be counted. Take advantage of the opportunity to track the status of your absentee ballot, as many states permit.

Educate your friends and family that vote counting will inevitably go past Election Day this year, and that’s just fine. State elections officials will be working  around the clock to make what will inevitably be a chaotic process run as smoothly as possible. Early action is the best way voters can ensure their mailed ballot still counts in what is shaping up to be a historic election.

Not everyone wants to vote by mail or at a dropbox. Some prefer to cast their ballot in the time-honored method of going to a polling place. If you choose to vote in your local polling place, come prepared with a mask and plenty of hand sanitizer. As experts have stressed, if basic precautions are followed, in-person voting “is about as safe as going to the grocery store.”

In short, there are many options to exercise your right to vote. Educate yourself on how to cast your ballot and have it counted in the way that makes the most sense to you. Vote because your rights depend on it. Vote for a government that works for all Americans. Vote because our democracy is at stake in this election and, most of all, don’t let your constitutional right to vote be wasted.