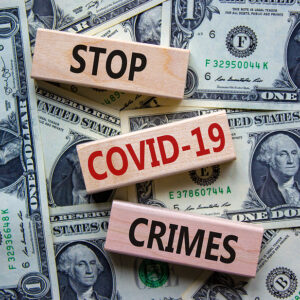 Last month, health officials in Maine announced the state had distributed more than 161,000 potentially counterfeit respirators “to school nurses, healthcare facilities and certain state workers with the Department of Health and Human Services,” according to a press release.

In September, authorities seized $163,000 in fake N95 masks at a port facility in Boston.

According to law enforcement and anti-counterfeiting experts at a recent online roundtable, those are just two of the thousands of examples of fraud inspired by the pandemic. From counterfeit masks to fake COVID tests — even bogus vaccinations — counterfeiters have stepped up their scams.

“It’s monumental, I don’t know if there’s a scale to measure it — the level of fraud we’ve seen since the start of the pandemic,” said Matthew Albence, former acting director of U.S. Immigration and Customs Enforcement, one of the roundtable participants.

Counterfeiters have been profiting off fraudulent personal protective equipment, cleaning products, and COVID-19 remedies for a year. And they can shift production of these illegal products so quickly, it’s hard to catch up, according to panelist Jay Kennedy, an assistant professor at the School of Criminal Justice and Center for Anti-Counterfeiting and Product Protection at Michigan State University.

Kennedy said the problem is global, referencing a seizure earlier this month of more than 3,000 fake vaccines in China, along with 2,400 doses at a connected warehouse in Germiston, South Africa.

In January, police in Washington state charged a man who was allegedly offering to inject customers with a COVID-19 vaccine for $400 to $1,000 with introducing misbranded drugs into interstate commerce, according to a press release from the Department of Justice.

Johnny Stine, of Redmond, Wash., claimed to be the founder and president of North Coast Biologics and was allegedly soliciting customers online.

“The very idea that someone would prey upon fearful people seeking a COVID vaccine in the midst of a global pandemic is not only despicable, but potentially deadly behavior,” said Robert Hammer, Special Agent in Charge of Homeland Security Investigations operations in the Pacific Northwest.

“Snake oil salesmen, such as this, who endanger consumers should take this arrest as a stern warning.”

Kennedy said during the roundtable he has not seen any information indicating there have been counterfeit COVID-19 vaccines sold in the northeastern United States as of yet.

Albence said criminals are so eager to get in on the counterfeit action they even try to con government agencies such as the Department of Veterans Affairs. He told the story of Christopher Parris, an Atlanta man who was charged last April with wire fraud for allegedly attempting to sell millions of nonexistent respirator masks to the department in exchange for large, upfront payments.

According to a press release from the Department of Justice, Parris was attempting to sell the VA a total of 125 million face masks and other personal protective equipment that would have cost over $750 million.

“He had no product,” Albence said. “He was working out of his basement with nothing. That’s the sort of scam people will fall for when they’re scared.”

One reason for the surge in fraud is the internet, said Hernan Albamonte, Head of Illicit Trade Prevention U.S., Philip Morris International.

“Online creates a great amount of anonymity for whoever is trying to do business there,”  Albamonte said. “Obviously, it’s easier than in real life and that is where there is this big challenge for enforcement from the private sector because you may bring down a site, but tomorrow there will be three more. It’s a whack a mole game all the time.”

In New Hampshire, officials at the Attorney General’s Office say that due to the high demand for vaccines, scammers may take the opportunity to fraudulently obtain money or personal information from individuals.

Any telephonic or email representation that a COVID-19 vaccination can be provided quickly in exchange for money or personal identifiable information is a scam, according to officials.

In New Hampshire, people will never be asked for payment to reserve vaccines or schedule an appointment.

They also will not have to provide confidential information, such as a Social Security number, credit card number, or bank account.

Granite Staters can call the Attorney General’s Consumer Protection Hotline at 1-888-468-4454 if they feel they have been a victim of a COVID-10 related scam.