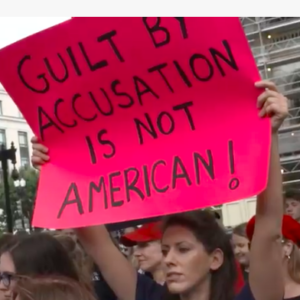 A "Women for Kavanaugh" rally in Washington, DC on the eve of Judge Brett Kavanaugh's confirmation to the Supreme Court
News

Could the Kavanaugh Controversy Turn NH-01 Into a Toss-Up?

The day after Eddie Edwards won the NH-01 GOP primary, people began writing him off. The Cook Political Report moved his race against Democrat Chris Pappas from “Leans Democrat” to “Likely Democrat.”  An ARG poll gave Pappas a 55-33 point advantage over Edwards. The conventional wisdom has been that Edwards might be able to run a good enough campaign to beat Pappas, and maybe he could run one good enough to ‘beat’ Trump (the president’s low poll numbers). But there’s no way he can beat both.

But now Edwards’ prospects are getting a second look–thanks to Justice Kavanaugh and the ‘Brett Bump.’

On Monday, the Washington Post released their latest poll of 69 battleground congressional districts–including NH-01– and here are the results:

So Democrats are up by four. Why is that good news for the Edwards campaign? Because, as NH GOP consultant Dave Carney points out, “In January of this year it was +11 for the Democrats. Turnout can bridge a 4-point gap. Not an 11-point gap.”

The generic ballot number has been lousy-to-awful for Republicans most of the past year, so four points looks good. And this number is even better:

NH-01 is one of that handful of competitive districts that both backed Trump and elected a Democrat for Congress in 2016. A one-point Democrat advantage is essentially a jump ball.  Now this national, aggregated poll isn’t as accurate as a single head-to-head poll of the Pappas/Edwards race.  But it adds credibility to a GOP poll released last week  claiming Edwards had a 2-point lead: 42-40 percent, with 14 percent undecided.

At the time that poll came out, many NH political pros scoffed–including the Republican ones. Now, it doesn’t seem as improbable.

There are other forces at work, too. A new YouGov poll finds that GOP enthusiasm about voting in November has actually edged past the Democrats, 77 to 75 percent. An NPR/Marist poll found that the 10-point gap between the number of Democrats and Republicans saying the November elections were “very important” is down to 2 points, a statistical tie.

Nationally the generic-ballot gap is still Democrats +7 according to the RealClearPolitics average of polls, but it’s been as high as 15 points in some polls this past summer. Today, GOP motivation is high–and that’s good for a Republican running in a congressional district Donald Trump won. And a district that has elected plenty of Republican members of Congress in the past.

In August, the NHJournal poll found just a 3-point Democratic advantage in the generic ballot question here in New Hampshire. That was much tighter than expected. It also showed a surprisingly-high 14 percent of voters were undecided at the time.

And then there’s the fact that continues to get overlooked: Trump won this district. Republicans have repeatedly won (and lost) this district over the past decade. That means there are enough Republicans and GOP-leaning independents to deliver the seat to Edwards. The question is whether they turn out and, once in the ballot box, do they cast a protest vote against the Democrats.

That last part is key, because Chris Pappas is fairly popular among Republican voters in his district. A moderate who is well-liked in the district, Pappas was getting 22 percent of the GOP vote in the ARG poll. (Edwards had 2 percent of the Democratic vote.) Increasing GOP turnout won’t be enough. Edwards needs a partisan Republican turnout. And now it’s possible he could get it.

Did Democrats overplay their hand in the Kavanaugh fight? Did the extreme rhetoric and attacks on the principle of “innocent until proven guilty” go too far?

If it turns out they’ve forced Chris Pappas into a competitive race in NH-01, the answer is “yes.”