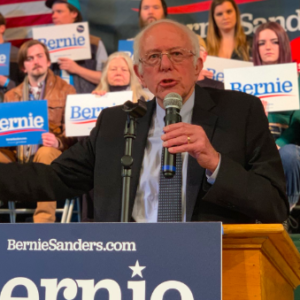 Why did Hillary lose in 2016? Because 6.7 million voters, mostly young and of color, who voted for Obama in 2012, stayed home or voted for a third-party candidate.

When asked why, their predominant reason was that they did not like either major-party candidate. These are voters who are clearly not loyal to a party, but make their choice based on the candidate.

When Bernie Sanders announces, repeatedly, that his campaign will bring out a large and diverse turnout of young people to beat Donald Trump, this is the phenomenon he speaks to. In the primaries of 2016, Bernie turned out record votes from young people and they voted for him overwhelmingly.

He is doing the same thing now in a multi-candidate race in 2020, taking a plurality of the under 44 vote in even higher overall turnouts.

In a Rachel Maddow interview with Bernie on MSNBC on March 4th, she claimed that Bernie’s strategy of turning out young voters was not working, asserting that, in the “first three primary states,” turnout was either “flat” or “had declined” and that “fewer young people came out than in 2016.”

However, the actual record differs considerably.

Comparing exit polls published by CNN in 2016 with those of Edison Research in 2020, published in the Washington Post, total turnout in each of the first three contests increased over the huge turnouts Bernie helped generate in 2016, including among the under age 45 voters. Bernie took the majority of them in a two person race against Hillary last time, yet still took more of those than any other candidate in a crowded field this time.

Moreover, on Super Tuesday, in a record overall turnout, Bernie got over 60% of the under age 30 vote, 3.5 times more than second place Biden, and over 40 percent of the age 30-44 vote.

The contrast was most stark in California, where most, but not all, votes are in, and Biden isn’t getting more than 7 percent of the under-30 vote! That dismal statistic portends yet another Hillary-like turnout among young voters in the general, or worse, if Biden is the nominee.

In a Super Tuesday exit poll reported by the DNC, 84 percent of voters stated they will definitely turn out in November to vote for whomever is the Democratic nominee, but perhaps the most telling exit poll was taken during the South Carolina primary, where only 69 percent of Sanders voters promised to return to back the “blue-no-matter-who” candidate.

In 2016, Bernie participated in 40 rallies in 90 days during the general election in an attempt to bring out voters to support Hillary Clinton. He held four, alone, here in New Hampshire, without which it is doubtful that she would have won the state as she had only squeaked out a win by about 1,000 votes in the end.

Having Bernie on the stump trying to rally young primary voters to come out for Joe Biden in November is unlikely to be any more successful than it was for Hillary, especially in swing states.

One interesting twist in the Biden turnout in Vermont and elsewhere, where primaries are open, that could account for some of Biden’s surprising numbers where he never campaigned, is that voters who self-identified as Republicans went for him by 43 percent compared to only 22 percent for Bernie.

Trump had repeatedly urged his supporters to vote in the Democratic primary for the weakest Democrat. Although he didn’t say who, the numbers suggest that Biden, and not Bernie, was their choice for that distinct honor (We don’t need Russian interference this time. We’ve got the GOP!)

The import of these exit poll data and surveys is clear: Bernie is proving his boast that he can turn out a youth vote in great enough numbers to beat Trump in November by bringing back the Obama voters who stayed home in 2016, and Biden is proving that he cannot. “Blue-no-matter-who” clearly applies to the older Democratic electorate that largely voted for Biden on Tuesday, but not the younger ones who voted for Bernie.

Therefore, if Bernie is the Democratic nominee, it will enhance the likelihood of a return to the party and ballot box of the lost Obama millennials in sufficient numbers to defeat Donald Trump. Conversely, an establishment Democrat without a message that resonates with younger voters, voters who are neither regular nor party-loyal, will ensure another four years of endless lies and corruption.

But never underestimate the capacity of the DNC to repeat the exact same strategy it undertook in 2016, while expecting it, this time, to magically lead to a different result.