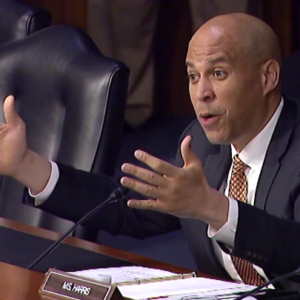 Should a traditional Catholic be allowed on the federal bench? Should an evangelical Christian be able to sit in judgment of the law? What about conservative Hindus, Orthodox Jews or practicing Muslims?

For more and more prominent figures in the Democratic Party, the answer appears to be “no.”

“Do you think gay relationships are immoral?” Booker asked the nominee.

“Do you believe they are a sin?” Booker followed up. When Rao declined to answer, he pushed her again: “So you’re not saying here whether you believe it is sinful for two men to be married. You’re not willing to comment on that?” Booker pressed.

These questions may sound irrelevant and off-putting to people who haven’t been following politics closely, but Sen. Booker’s questions are part of a trend that has emerged over the past two years: prominent Democrats challenging nominees on their personal religious views, suggesting that they raise questions about the nominee’s fitness to serve.

Buescher, a lifelong Catholic, answered: “I do not recall if I was aware whether the Knights of Columbus had taken a position on same-sex marriage at the time I joined at the age of 18.”

Sen. Ted Cruz (R-TX) called out Sen. Booker and his fellow Democrats, saying that the Judiciary Committee shouldn’t be a “theological court of inquisition.”

“We’ve seen a growing pattern among Senate Democrats of hostility to religious faith. I have to say, I was deeply troubled a few minutes ago to hear questioning of a nominee, asking your personal views on what is sinful. In my view that has no business in this committee. Article Six of the Constitution says there should be no religious test for any public office,” Cruz said.

Conservative organizations also spoke out, complaining of “bullying tactics” from Senate Democrats. Penny Nance of Concerned Women for America called on “senate liberals to stop the religious litmus tests, gridlock and bullying tactics and confirm her.”

But are Democrats, particularly those competing for primary votes, concerned about the views of conservatives, or even people of faith?  Or has the Democratic Party become a secular party where people of faith play only a marginal role?

This appears to fit the overall philosophy of the Democratic Party.  According to exit data from the 2018 midterms, while voters who identify as Catholic split nearly evenly between the two parties, 63 percent of people who never attend church or religious services told pollsters they voted Democratic, while 61 percent of regular churchgoers went for Republicans. Only a third of Democrats say they believe in the biblical concept of God, according to Pew Research.

In New Hampshire, the territory is even less friendly to Democrats of faith. The home of the vital First-In-The-Nation primary is one of the most secular states in the US.  A 2012 UNH poll of Democratic primary voters found 61 percent said they rarely/never attend church.

“We continue to see members of the coexist crowd, this time US Senator Cory Booker, seeking to drive supporters of traditional marriage from the public square,” said Chuck McGee of the Concord, NH Knights of Columbus.  “For them, disagreement is not allowed. You must believe what they believe or be banished.”

Have Democrats “banished” the religiously-faithful from their midst?  Will 2020 candidates like Harris and Booker continue to question the qualifications of people of faith seeking public office?  If they do, and they win their party’s nomination, what does that say about the modern Democratic Party?