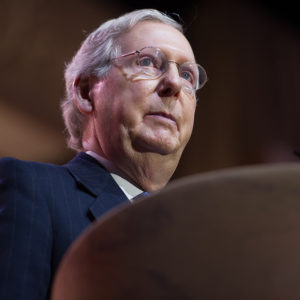 Conservatives Turn on Trump Over Decision to Abandon the Kurds

Attacks on President Trump from hardcore political partisans are nothing new. But from hardcore Republican partisans? This is uncharted territory in the Trump era.

Sunday’s late-night announcement that Trump is withdrawing American troops from northern Syria and leaving U.S. Kurdish allies to face an almost certain onslaught from the Turkish military sparked a rarely seen rebuttal from Republican officeholders. Politicians who usually go out of their way to avoid criticizing Trump — and incurring his social media wrath — have openly denounced his decision and are even threatening legislative action to stop him.

It’s not just Republicans, of course. New Hampshire Sen. Jeanne Shaheen has spoken out on U.S. policy in northern Syria for years and she released a statement on Monday warning that “the President is opening the door for a security vacuum that risks a resurgence of ISIS. It is important to recognize that terrorism in Syria does not stay in Syria.”

Rep. Liz Cheney, a frequent defender of the president, called his decision a “catastrophic mistake.” Sen. Majority Leader Mitch McConnell, who has worked closely with the White House on both policy and political strategy, not only opposed the action but released a public statement comparing Trump’s actions to Barack Obama’s.

“As we learned the hard way during the Obama Administration, American interests are best served by American leadership, not by retreat or withdrawal,” McConnell said.

Even South Carolina Republican Lindsey Graham, Trump’s most tireless cheerleader in the U.S. Senate, is calling Trump out. “I hope I’m making myself clear how shortsighted and irresponsible this decision is, in my view,” Graham told Fox News. “This to me is just unnerving to its core.”

He went on to promise the GOP-led Senate would act. “If this plan goes forward I will introduce Senate resolution opposing and asking for reversal of this decision,” Graham tweeted. “Expect it will receive strong bipartisan support.”

Trump has responded as expected, with a flurry of tweets denouncing his opponents and celebrating his own “great and unmatched wisdom.” But rather than being intimidated, conservative opponents continue to speak out, even within the pro-Trump Evangelical community.

“The U.S. backing out of Northeast Syria is a betrayal of our friends and allies, a disavowal of our values, and will work against our long-term interests in the region. President Trump needs to realize this and reverse course — before it’s too late,” the Family Research Council said in a statement.  Televangelist Pat Robertson even declared “The President of the United States is in danger of losing the mandate of Heaven if he permits this to happen.”

So many Republicans — from moderate Sen. Susan Collins of Maine to solid conservative Sen. Marsha Blackburn of Tennessee — oppose Trump’s policy, it’s hard to find supporters on the Right.

There are a few. Sen. Rand Paul, an unapologetic isolationist whose foreign policy views often mirror Democratic Sen. Bernie Sanders, endorsed Trump’s policy. So has the Heritage Foundation’s Jim Carafano, who denounced President Obama’s withdrawal of U.S. troops from Iraq in 2010 but now supports Trump’s pullout. In fact, Carafano even denies the Kurds in Syria were ever America’s allies.

“We have a relationship with them. We fulfilled our obligations to them. And I think that’s fine,” Carafano told InsideSources. “But we don’t have a treaty with them. So they are not an ally.”

And, Carafano adds, President Trump had no choice but to pull U.S. troops once Turkey decided to attack the Kurds.

“Our troops could stay where they are, but then they might get killed by Turkish troops, and that doesn’t make a whole lot of sense,” Carafano said. “They [Turkey] told us what they were doing. We’re smart, so we got out of the way.”

This willingness to abandon previously-held positions in order to support Trump has become commonplace in GOP politics, but it’s noticeably absent on the Kurdish issue. One reason may be that fighting terrorism and the need for the U.S. to play a role in the Middle East is one of the few remaining conservative policies to survive contact with the Trump presidency.

“This decision shows the president really does have an isolationist’s heart,” says Reuel Marc Gerecht of the Foundation for the Defense of Democracies. “This move by Trump was inevitable, and it was only a combination of events and personnel that temporarily halted his decision.”

As for the notion that Turkey forced Trump’s hand by announcing they were going to take military action despite the presence of U.S. troops, Gerecht dismisses that as “silly.”

“It’s the type of attitude that will essentially get the United States checkmated everywhere. It’s not hard for the United States to simply tell [Turkey’s President] Erdogan and say ‘no, it’s not going to happen.’”

Plus the image of America’s military fleeing the field in the face of threats is not the projection of strength most Republicans associate with President Trump.

“I’m upset, not primarily over the notion of the United States betrayed its partners on the battlefield, but because strategically it makes no sense,” Gerecht said. “Trump is essentially at one with the Sanders wing of the Democratic Left, and the world view that the United States would be a better place if it abandoned its historic post-World War Two role in the Middle East.

“Why would the United States take an action that both abandons an ally and benefits the three forces we are aligned against: Assad, Iran and Moscow? It just makes no sense,” he said.