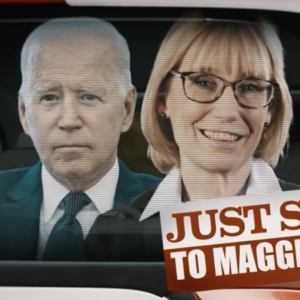 A new political action committee with the self-declared mission of “electing conservative candidates” has dropped an ad targeting Sen. Maggie Hassan over her support for the Biden administration’s energy policy.

The Sentinel Action Fund (SAF) announced it is spending $300,000 on broadcast television in Manchester, N.H. from July 17 to 31. While the buy is relatively small, the PAC is a partner organization with Heritage Action for America, which claims a grassroots network of two million activists.

And, says SAF president Jessica Anderson, there is more to come.

“This ad is one of the first of many, and the beginning of a wave of grassroots support in August and September.”

Anderson said Hassan’s seat is viewed as one of the top opportunities for a GOP pick-up in November, along with Sens. Raphael Warnock in Georgia and Catherine Cortez Masto in Nevada. The challenge is New Hampshire’s extremely late primary — September 13 — which is keeping resources on the sidelines. But that does not mean conservatives can afford to sit back and let Hassan attempt to rewrite her record.

“Hassan is incredibly vulnerable. Her unfavorables are at 51 percent. But we can’t sit on our hands all summer because of the late primary. We’ve got to deliver a clear message about Hassan’s support for Joe Biden and the Democratic Party’s agenda now.”

In a press release, SAF points out that while “Hassan is trying to distance herself from her buddy Biden, the numbers tell a different story: she voted with Biden over 97 percent of the time.”

Other GOP-affiliated super PACs are already in the race, including One Nation, which launched a $4.7 million summer “advocacy effort” also highlighting Hassan’s record on inflation, energy policy, and her support for Biden.

Hassan and her allies are more than matching the ads dollar for dollar. In fact, Hassan has already spent more than $20 million this cycle, much of it on advertising. But Republicans like Gov. Chris Sununu note it has had no impact on her standing with the voters.

“Two years ago, she had an approval rating of 42 percent,” Sununu said during a radio interview last week. “She spent $20 million. Guess what her approval rating is today? Forty-two percent.”

Hassan has since launched an ad claiming the status of bipartisan “fiscal hero” and touting her record on taxes and spending while serving in state government.

As for fiscal responsibility in Concord, legislators who served with Hassan say that claim is less than credible. As governor, Hassan proposed more than $100 million in tax and fee hikes, and she vetoed a budget to prevent business tax cuts from taking effect.

“I was there to remember when [then-Gov.] Hassan had to ask her own Democratic caucus to override her veto of the state budget,” said Rep. Kimberly Rice (R-Hudson.)

Hassan’s campaign declined to respond to a request for comment.

Sentinel Action Fund is a new PAC, created in April. Asked what makes her organization — whose motto is “We back conservative champions” — different from other PACs active in the 2022 cycle, Anderson says its motivation is more than mere partisanship.

“Our goal is to elect conservative candidates, and to promote all of the issues conservatives care about. Not just economic issues, but also family and life issues, too,” Anderson explained. “Conservative voters care about many issues across the spectrum. The day of single-issue voters was 15 or 20 years ago.

“Our job as a new PAC in town is to promote conservative candidates who can champion all those issues.”