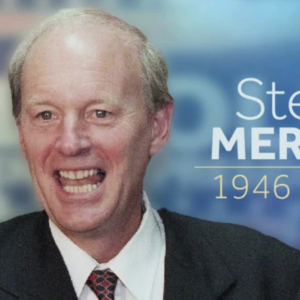 “Despite his conservative leadership, Merrill was friendly and had a sense of humor.”

“Despite?” What’s the connection between Merrill’s conservatism and the fact that he was known as both a compassionate and funny person, many Granite State Republicans asked. To some, it was yet another sign of WMUR’s coverage drifting toward the left.

“This is unacceptable rhetoric. Sadly this blatant bias and attack on conservatives from the mainstream media is the norm and just another example of why so few trust them,” responded Lynne Blankenbeker, a candidate in the Republican NH-02 primary. “An apology to the Merrill family is the least WMUR can do.”

Rep. Fred Doucette, state co-chair of the Trump 2020 campaign, tweeted, “Wow…. simply Wow. Not the propaganda arm of the Democratic Party at all?”

WMUR’s coverage of the Republican governor’s death also included a graphic that implies he was a supporter of “broad based taxes,” though the report itself noted accurately that he opposed them. 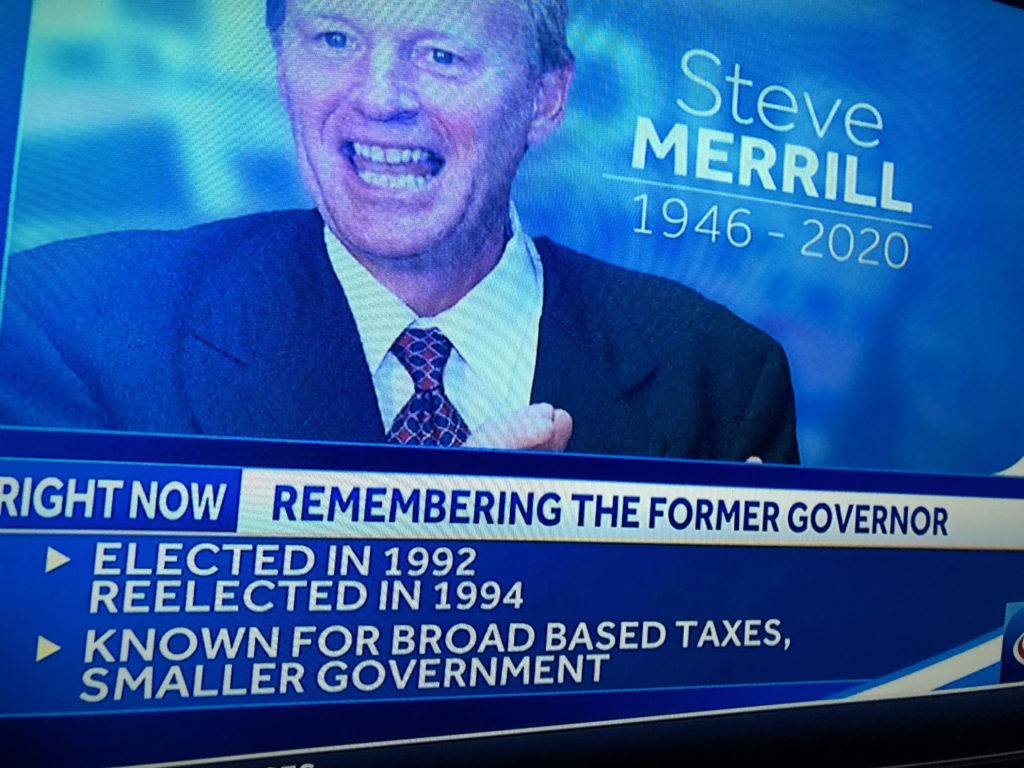 Contacted by NHJournal, News Director Alisha McDevitt said, “The poor word choice in the line you are referencing was immediately corrected.” She included links to two WMUR news packages that didn’t include the offending language. (Links here and here.)

Both WMUR Political Director Adam Sexton and political reporter John DiStaso are widely respected in New Hampshire political circles for their efforts at objectivity. And politically-active Granite Staters praise the station’s decision to host prime-time debates among primary candidates, a civic service TV stations in many markets no longer offer.

At the same time, some Republican critics argue, the station’s coverage as a whole has taken on the national media’s general “unfriendly to the Right” tone.

“More and more, Republicans are noticing that the coverage at WMUR is taking on the anti-GOP tone of the national media,” longtime Republican strategist Pat Hynes told NHJournal. “What they did to Steve Merrill on Sunday never would have happened 10 years ago.”

For example, during the WMUR debate between Don Bolduc and Corky Messner, Monica Hernandez asked, “why do you think police keep shooting a disproportionate number of black men in America?” In fact, that’s not true. Multiple studies have debunked this claim. The question reflected not fact checking and data, but rather the national media narrative on police shootings.

Both Republican candidates pushed back on the question during the debate, and the error has been pointed out to WMUR. But they have yet to issue a correction.

The same with their COVID-19 coverage, which still maintains its tone of a state in crisis, despite the number of hospitalizations and deaths from the coronavirus in New Hampshire steadily declining for months. As the Josiah Bartlett Center (JBC) reported,

“August has recorded New Hampshire’s lowest numbers of COVID-19 infections, hospitalizations and deaths since May….both fell by 90% since their peaks in April and May, respectively.”

“Media reports focused on daily snapshots or cumulative totals have masked the decline. Looking at the monthly trends shows just how sharply and quickly the state’s numbers have fallen,” the JBC report added.

WMUR continues to misreport positive tests as “cases,” though the majority of people who test positive have few if any symptoms and only a fraction require any medical treatment. Every day they report the number of people who have “recovered,” without any data showing these people ever had an illness to recover from.

This COVID-19 coverage fits in well with the national packages they run from ABC News (WMUR is a network affiliate) and the CNN coverage populating the WMUR website. But, critics argue, it doesn’t reflect the facts on the ground in New Hampshire.

WMUR’s coverage of Gov. Merrill was nearly entirely positive, and these missteps may have more to do with error than bias. But it’s also undeniable that many New Hampshire Republicans don’t believe they are being covered fairly by the state’s most important television news source.

Republicans like state Rep. Katherine Prudhomme O’Brien (R-Derry), who called WMUR’s comment about Merrill’s conservatism “disgusting, and quite telling of the innate bias at WMUR.”