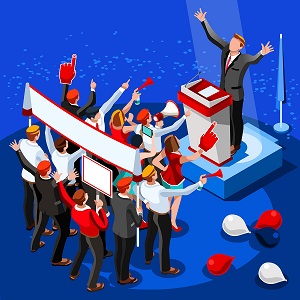 Ahead of next year’s midterm elections, congressional candidates on both sides of the aisle are gearing up for a long campaign cycle by hiring staffers and courting fundraisers with significant national and statewide experience.

New Hampshire’s two congressional districts will be subject to significant national political coverage in 2018, especially now that the First Congressional District seat will be vacant.

Rep. Carol Shea-Porter announced in early October she would not seek reelection. Shea-Porter was first elected to Congress in 2006, serving until she was defeated by former Republican Rep. Frank Guinta, in 2010. She defeated Guinta in 2012, lost to him in 2014, and defeated him in 2016.

The seat is considered one of the most competitive tossups in the country. So far, at least three Republicans and over a dozen Democrats have indicated they are running or have an interest in joining the race. In preparation, several candidates have assembled political consulting firms and media strategists to assist their respective campaigns.

While MacKenzie seeks the support of union members and veteran Democratic political players, another candidate has emerged with an equally intriguing profile.

Executive Councilor Chris Pappas, D-Manchester, announced last week he is running for Congress, buoyed by an endorsement from the United Steelworkers Union. Coupled with his role as owner of the Puritan Backroom, Pappas has been viewed as an early frontrunner in the crowded Democratic field, even attracting attention from the national party. If elected, Pappas would become the first openly gay representative from New Hampshire.

On Nov. 2, WMUR reported that the Democratic Congressional Campaign Committee had issued robocalls polling voter support for Pappas, but not the other announced or potential candidates. This robocall also occurred prior to Pappas’ entry into the race, which raised questions about whether the national party was expressing its preference.

Democrats aren’t the only ones showing interest in the race on a national level. During her first visit to New Hampshire last month, Republican National Committee Chairwoman Ronna Romney McDaniel said the race was an opportunity for the party to gain another seat in Congress.

Former liquor enforcement law enforcement chief Eddie Edwards is one of two declared Republican candidates and has bolstered him campaign with consultants who assisted the presidential campaigns of Donald Trump and Sen. Rand Paul, R-Ky.

Edwards hired the Ohio-based Strategy Group for Media, which is headed by former Paul backer Rex Elsass. The firm moved to support Trump after Paul dropped out of the race and worked through the general election for the Republican nominee.

Edwards has also hired Sam Rubino as a full-time on-the-ground staffer with experience in Republican races across the country. Rubino, originally from South Carolina, has a background in Montana politics, recently serving as field director for Rep. Greg Gianforte’s successful campaign.

Dr. Stewart Levenson, one of the whistleblowers from the Boston Globe exposé about the Manchester Veterans Affairs Medical Center, and Rep. Steve Negron, R-Nashua, are both running for the party’s nomination.

Defeating Kuster will be an uphill battle for either candidate, especially considering her campaign war chest has more than $2 million on hand and raised over $400,000 during the third quarter of 2017. For his part, Negron has already invested $116,000 of his own money into his campaign and brought aboard several seasoned political strategists who hope to give him a boost next year.

Negron also secured the services of another veteran Granite State political operative: Michael Biundo and his consulting firm, RightVoter LLC. Biundo and his firm are also working for Edwards in the First Congressional District race.