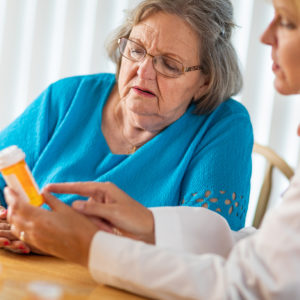 Congress Should Side with Seniors on Prescription Drug Costs

Anyone who wants to be the next president needs to protect seniors, not drug company profits.

Congress did a good thing earlier this year when it passed a law to help America’s seniors pay less for their prescription drugs. But now, big drug companies are spending millions trying to strong-arm members of Congress into breaking the deal just to boost their own profits.

This would be a terrible blow to seniors. Over 40 million older Americans rely on the Medicare Part D prescription drug benefit to help them pay for life-saving medicines. Unfortunately, an increasing number of them have to decide between putting food on the table and filling their prescriptions.

Consider this: AARP’s Public Policy Institute found that the average annual retail price for widely-used brand name prescription drugs was nearly $6,800 in 2017. For the average older American who takes 4.5 brand name prescription drugs on a chronic basis, their annual cost of therapy would have been more than $30,000—over 20 percent higher than the median annual income for Medicare beneficiaries.

In a 2015 AARP survey of the 50+ in New Hampshire, 85% said that affording health care/prescription drugs was extremely or very important to them.  What’s more, nearly half (48%) said they worry about being able to afford their prescription drugs.

The law passed earlier this year required drug manufacturers to provide a bigger discount on their brand name drugs for the Medicare beneficiaries who are in the Part D donut hole. This critical reform, if allowed to continue, would save seniors an estimated $6.7 billion between 2020 and 2027.

PhRMA wants Congress to roll back this year’s Part D deal, which would deliver $4 billion more in profits to pharmaceutical companies over 10 years. The industry is the last one that needs to make more money off of seniors and taxpayers. In 2016 alone, Medicare Part D paid $141 billion to drug companies.

These same big drug companies who reap tens of billions of dollars annually from Medicare Part D are trying to get Congress to reverse the savings it delivered to seniors earlier this year. These companies are spending millions on advertising and lobbying targeting Congress. What a waste!  Those millions could be devoted to developing drugs to treat diseases such as Alzheimer’s and Parkinson’s.

And there’s an ironic disconnect.  President Trump has been talking a lot lately about how unfair it is that Americans pay the highest drug prices in the world. But just months after Congress made progress toward lowering drug costs, some members of Congress are preparing to side with the drug lobby rather than look after their own constituents’ interests, which align with the President’s position.

Senators and others who want to be President, take note. When you come to our community, be prepared to show that you have what it takes to stand up to big drug companies. Older Americans vote – a majority of voters in the 2018 election were over 50 – and they will remember whether presidential candidates stand by seniors or sided with big drug companies to raise the cost of prescription