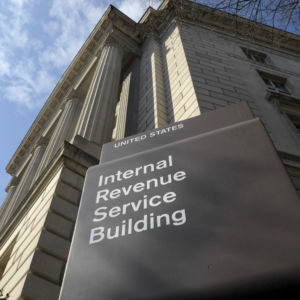 I have a deep appreciation for institutions that can deliver on their promises and provide the safety, security, and timely service all hardworking taxpayers deserve. Trust is a key component of any successful enterprise, no matter how big or small. Granite Staters deserve to know that you can deliver on your promises, whether you’re a small business in New Hampshire or a massive government agency.

Unfortunately, there are proposals currently being considered by Congress that would make it nearly impossible for the Internal Revenue Service (IRS) to deliver on its promise to provide top quality service and enforce the law with integrity and fairness for all hardworking taxpayers. The agency is proposing the creation of a government-led tax preparation system that would task the IRS with both collecting and filing our taxes. That would be a dramatic expansion of the IRS’ authority and would mean that the agency that is tasked with raising revenue for the government would also tell Americans how much they owe the government.

If that isn’t a clear conflict of interest, I don’t know what is.

As a taxpayer, it currently takes forever to get clarifications or answers to even minor questions. A recently released report from an independent agency watchdog outlines that this situation won’t get better anytime soon. The report, released in January, shows the IRS is an agency in crisis. For yet another year, the IRS is beginning tax season with a backlog of nearly 10 million unprocessed returns from the prior filing period. Ironically, that is due in large part to the fact that the IRS’ responsibilities were already expanded dramatically during the pandemic when the agency was tasked with overseeing multiple stimulus payments and economic relief programs.

The IRS is not fully to blame for these inefficiencies. The agency has seen its workforce and budget consistently shrink in recent years and has had to reallocate staff to attempt to meet the new demands placed on them. But as the report details, the imbalance between the agency’s workload and its available resources has never been greater. An additional sobering fact was recently noted by officials from the Treasury Department. They noted that in the first half of last year, with the influx of calls to the agency and a perennial shortage of staff, there was about one available IRS employee to every 16,000 calls the agency received. Imagine running your business that way. That is not the kind of customer service that Americans deserve.

Expanding the IRS’ role even further will likely result in a bureaucratic disaster that would be incredibly unfair to the hardworking men and women who depend on timely tax refunds every year and every American whose tax dollars fund IRS operations. As we head further into tax season, now is not the time to expand the scope and responsibility of the IRS.

I strongly hope that New Hampshire’s elected officials, including U.S. Sens. Maggie Hassan and Jeanne Shaheen, will hear the concerns of their constituents and do all that they can to prevent this potentially calamitous bureaucratic nightmare from becoming reality.

Robert Cone is from Berlin and recently retired in the New Hampshire Army National Guard. He wrote this for NHJournal.com.