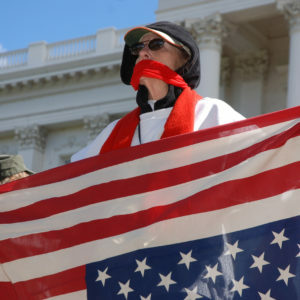 COMMENTARY: When It Comes to the 4th, Dems May Want to Plead the 5th

After a year of lockdowns and letdowns, many Americans wanted to do Independence Day up right. They were ready to party, to let their patriotic party flags fly.

Only, according to The New York Times last weekend, flying the American flag is now problematic.

An article headlined “A Fourth of July Symbol of Unity That May No Longer Unite” suggested waving the national symbol is actually a political partisan act. “Today, flying the American flag from the back of a pickup truck or over a lawn is increasingly seen as a clue, albeit an imperfect one, to a person’s political affiliation in a deeply divided nation,” the Times wrote.

To paraphrase Woody Guthrie, this flag was made for you — not me.

That was certainly the message of progressive Democrat and “Squad” member Rep. Cori Bush of Missouri:

“When they say that the 4th of July is about American freedom, remember this: the freedom they’re referring to is for White people,” Bush tweeted. “This land is stolen land and Black people still aren’t free.”

Not surprisingly, the tweet sparked a backlash in conservative media. But it also sent many progressives — including some New Hampshire Democrats — to the Twitter barricades to re-tweet her message and defend her views.

Bush isn’t a national political figure like her fellow Squad members such as Rep. Alexandria Ocasio-Cortez, but her message seems to fit right in. And while some Democrats might want to dismiss her as part of the fringe, they can’t do the same to The New York Times, or The Washington Post, or National Public Radio.

The same day the Times was declaring the U.S. flag politically suspect, their fellow travelers at NPR were adding a “trigger warning” for the first time ever to their annual reading of the Declaration of Independence.

“Over the past 32 years, Morning Edition has broadcast a reading of the Declaration of Independence by NPR staff as a way of marking Independence Day,” the host announced. “But after last summer’s protests and our national reckoning on race, the words in the document land differently.

“It famously declares ‘that all men are created equal’ even though women, enslaved people, and Indigenous Americans were not held as equal at the time,” the host added before listing more grievances against the Founders.

And The Washington Post took the opportunity of the Fourth to argue it’s time to reconsider another iconic American symbol. “Maybe It’s Time To Admit That the Statue of Liberty Has Never Quite Measured Up,” they wrote.

Not to be outdone, longtime MSNBC regular and social justice activist Toure tweeted, “F–k Independence Day. Not only were we not free, the whole reason the Colonies wanted independence was because Britain was moving toward abolishing slavery. Why would Black people celebrate a day so wrapped up in our enslavement?”

Democrats can dismiss claims that their party is anti-American — or at the least unpatriotic — and these examples as mere anecdotes. The problem is that these ugly claims about the “grand old flag” and the “home of the free and the brave” are now at the center of Democratic Party politics.

And as a result, they’re likely to be a drag on even the most patriotic Democratic candidates in their wake.

The fundamental premise of the Critical Race Theory, for example, is that America is a racist nation, infected with “systemic racism” and full of racist (read “White”) people who are pillars of the country’s white supremacy. New Hampshire Democratic legislators literally took turns during the budget debate declaring that not only is this true, but properly educating students is impossible if teachers can’t advance these ideas.

They continue to insist, today, that refusing to allow government workers to use CRT is “racist,” as a recent House Democratic Caucus press release called it.

The Democrats’ economic policies are also premised on the notion that America is an unfair place where the rich (read “White people”) steal from the poor (read “people of color.”) Democrats like Sen. Elizabeth Warren have called for widespread wealth confiscation in the pursuit of “economic justice.”

In fact, Democrats went so far as to pass a COVID relief bill that gives some forms of COVID relief only to people of color, denying funding to White farmers and business owners in need. (Courts have since struck down those racist policies.)

It may come as a shock to Democrats like Sen. Maggie Hassan and Rep. Chris Pappas, but when your party keeps bashing America as a racist hellhole and its flag a symbol of hate and oppression, voters are eventually going to notice. They’ll be tempted to conclude that being part of the Democratic Party that’s pushed this anti-patriotism says something about the politicians who are members.

This isn’t fair to Hassan, Pappas, et al., who’ve never suggested they view the American flag as anything other than a symbol to be honored. They haven’t echoed these attacks on America, either. But in the current environment of partisan polarization, will that matter? The Democratic brand is being damaged by the steady stream of America bashing from elected Democrats and media liberals. Every Democrat is likely to pay a price.

(Then again, they both voted for the “no Whites” COVID relief policy pushed through Congress on a partisan vote, so maybe they’ve earned a bit of it.)

In the past, Republicans tried to label Democrats as unpatriotic, using issues like the War on Terror as political wedges. Not this time.

Saying Democrats don’t like America isn’t an accusation. It’s “quoting them accurately.” It’s not a smear from some right-wing talk host. It’s the front page of The New York Times.