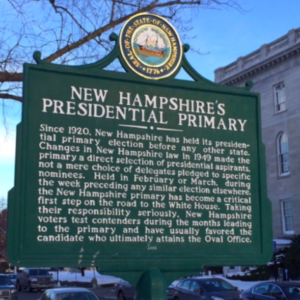 COLE: First-in-the Nation, If We Can Keep It

Posted to Education July 06, 2021 by NHJOpinion

The NH Leadership PAC sponsored an essay contest on the benefits of the First In The Nation primary to New Hampshire and to the nation. Essay judges were Secretary of State Bill Gardner, community activist Augusta Petrone and Neil Levesque, Executive Director of the New Hampshire Institute of Politics at St. Anselm University. 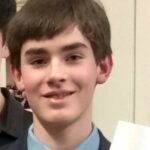 This year’s winning essay below was written by 14-year-old Sam Cole, a homeschool student who lives in Goffstown.

Ubiquitous campaign signs marking roadways. Multimedia ads in residents’ heads. Telephones ringing and doorbells dinging. Town halls. Debates. Media everywhere! These are shared experiences for Granite Staters leading up to New Hampshire’s first-in-the-nation presidential primary. The one hundred-year-long tradition did not always draw such fanfare, but the primary is now one of the most important events in the selection of our nation’s president.

The New Hampshire primary has been in existence since 1916, and it became first-in-the-nation in 1920 by accident. Before primaries were held, party insiders controlled presidential nominations via state party caucuses by selecting delegates to the national convention. With the rise of progressive reforms, primaries were established as a way to bring ordinary citizens’ voices into the nominating process.

In 1916 Indiana held the first primary, followed by New Hampshire and Minnesota holding theirs on the same day. In 1920, Minnesota switched back to a caucus, and Indiana moved its primary back in the year, leaving New Hampshire first-in-the-nation by default. While Granite Staters were able to vote in the primary, they cast ballots for convention delegates rather than candidates.

Voter turnout was low under this system. As a result, in 1949 the Speaker of the New Hampshire House of Representatives, Richard Upton, sponsored a bill to establish the state’s first presidential preference primary. He wanted the primary to be more meaningful to the people and to increase turnout. The bill passed, and in the 1952 primary, the presidential candidates’ names would appear on the ballot for the first time.

Upton’s idea was a success; voter participation increased in the 1952 primary, and it drew national attention with candidates campaigning throughout the state. Ever since, New Hampshire has drawn candidates and media attention from around the country. Voters love this, and with it they have come to view the primary as their responsibility, resulting in New Hampshire having high voter turnout. In the 2016 primary, voter turnout was 54.4 percent. In 2020 it was 42.4 percent. (electproject.org) An engaged populous is a major benefit of the primary as Granite Staters make well-informed choices from a wide field of candidates.

One factor that draws a wide field of candidates is the state’s low filing fee. For a mere $1,000, a candidate’s name can appear on the ballot. In comparison, South Carolina’s filing fees are tens of thousands of dollars more. As then-Congressman John Kasich put it in 2000 when campaigning in New Hampshire, “Iowa and New Hampshire are the keys for anyone not born a millionaire. They don’t care who you are. They want to know what you are all about,” (Gregg and Gardner 253) The New Hampshire primary, therefore, allows underfunded candidates campaign access they may not find elsewhere.

Another benefit to voters, candidates, and the nation is New Hampshire’s record of election integrity and ease of ballot access. The state constitution requires that ballots be counted the night of the election. Compared to the delayed reporting in the 2020 Iowa caucuses and New York primary, New Hampshire’s ballot-counting system is smooth and accurate, as is the voting itself. People can register to vote the day of the election, and no party affiliation is required, which benefits Granite Staters who choose to remain undeclared.

The New Hampshire presidential primary is a long-standing tradition that has benefited both New Hampshire and the United States as a whole. New Hampshire has high voter turnout, election integrity, low filing fees, a candidate-friendly environment, and the primary provides the residents of the state with an all-around fun and unique opportunity in the selection of our nation’s president.

When the primary is done, Granite Staters may breathe a collective sigh of relief as the circus rolls out of town.