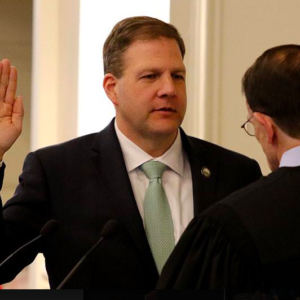 Republican Chris Sununu is sworn in to a second term as governor of New Hampshire in January 2019.
News

Gov. Chris Sununu announced Wednesday he’s canceling his scheduled public inauguration ceremony due to alleged danger — not from the COVID-19 pandemic, but from opponents of his statewide mask mandate who he described as “armed protesters.”

“For weeks, armed protesters have increasingly become more aggressive, targeting my family, protesting outside my private residence, and trespassing on my property. An outdoor public ceremony simply brings too much risk. We do not make this decision lightly but it is the right thing to do,” the governor said in a press release. He was scheduled to be sworn in at an outdoor statehouse event on January 7th.

The move comes just two days after an impromptu protest at his residence on Monday evening in response to news of a controversial ordinance prohibiting picketing in Newfields, his hometown. Nine people received $100 citations — including this reporter — and one person was arrested for disorderly conduct and criminal trespass.

None of the attendees on Monday evening were openly armed, but Skylar Bennett of Concord was legally carrying a concealed handgun when he was arrested on trespassing and disturbing the peace charges, though he never displayed the weapon publicly, according to media reports.

ReopenNH, which has been protesting Sununu’s COVID-19 policies for months, planned to hold a statehouse protest on inauguration day. Their chairman, Andrew Manuse, urged supporters to “bring your pots and pans, megaphones, and protest signs, and be ready to march around to let him know how displeased you are with his usurpation of powers.”

The protest is modeled after Iceland’s “pots and pans revolution” in response to a 2009 financial crisis. Similar protests have been held around the globe and are designed to be peaceful. Manuse told NHJournal his group rejects the governor’s suggestion they pose a danger to Sununu or his family.

“ReopenNH has never advocated for violent protests, and in fact, we have opposed protests at the governor’s personal residence since the idea first surfaced in April. And we even released a statement about that.” Manuse said. “We find it ironic, however, that the governor who lauded and invited violent protests during the Black Lives Matter episode is now cowering from facing peaceful citizens at the statehouse who simply want to bang pots and pans together to show our displeasure of his abuses of power.”

Frank Staples from a group calling itself Absolute Defiance, which has organized the protests outside of Sununu’s home, says his organization was supporting the protests on inauguration day but that firearms have been specifically discouraged. “We’ve asked for people not to [open carry],” he says.

“No threats in any way, shape, or form” have come from his group, Staples tells NHJournal. And Absolutely Defiance has expelled folks for inciting violence and says that “police told us we were infiltrated by a state police agent who was creating problems. We discovered him and removed him before we got the tip.”

As far as the threats, Staples said he has heard rumors. “One of the police officers told us he’s had death threats,” Staples said.

Absolute Defiance has an “ecumenical gathering” scheduled for this Sunday at Newfields Town Hall, which is in close proximity to the Sununu residence. The event promises prayers and discussion with a peaceful march to follow, but it’s not clear where they will march.

The Newfields ordinance prohibiting picketing came as a direct response to the protests at Sununu’s home, according to the minutes from the December 8 select board meeting.

Harvey Silverglate, a free-speech advocate, tells NHJournal that “the ordinance unconstitutionally — clearly unconstitutionally — seeks to suppress precisely the kind of rally and protest that is core protected speech. This is not speech on the fringe, or on the borderline.”