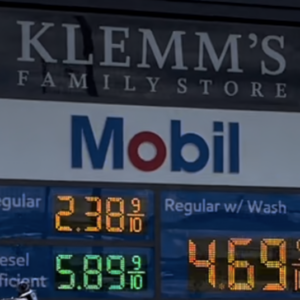 Drivers lined up for gasoline at one Salem, N.H. gas station on Wednesday morning to fuel up at a price not seen since President Biden moved into the White House: $2.38 per gallon.

Americans for Prosperity teamed up with Arthur Klemm, the owner of the Mobil station at the new Tuscan Village in Salem, to offer the discount gasoline for 90 minutes. The group says it doled out nearly 3,000 gallons to more than 250 drivers in that time, with lines nearly half a mile long to get into the 16-pump station.

AMAZING response at our #TrueCost tour stop in Salem NH!

Tomorrow we head up to Simons Mobil in Littleton at 456 Union Street!

11:00-12:30 you can fill up for $2.38/gallon and get a reprieve from Washingtons #PayMoreGetLess actions#NHPolitics

At the peak, drivers were waiting more than 30 minutes to get their chance to save big.

“Today we showed hundreds of people why top-down Washington mandates are the wrong answer and the response we got was overwhelming,” Greg Moore, state director for the libertarian-leaning political advocacy organization told NHJournal. “The drivers who stopped by let us know loudly and clearly that it’s time for change.”

“It was like Christmas in June,” said Jeff, a driver who filled up his 31-gallon truck. “Times are tough for everyone right now and to save at the pump keeps a little extra cash for emergencies.”

The group has a team on a “True Cost” tour traveling the country bringing awareness to, and relief from, high gas prices. “Together, we can convince Washington to end wasteful spending, unleash energy abundance, and ignite innovation,” the tour website notes.

“Granite Staters are being crushed with high inflation and there is no greater example than every time we fill up at the pump,” Moore said. “This inflation is directly tied to bad decisions in Washington, such as wasteful spending, bad regulations, and efforts to drive an agenda for special interest and against the people in Salem and across New Hampshire.

“It’s time for the folks in DC to put the American people first and stop doubling down on failed policies.”

The average price of gasoline in New Hampshire is $4.86, according to AAA, as is the national average.

Senator Maggie Hassan (D-N.H.), facing an uphill re-election battle this year, continues to push for a national gas tax holiday, a move that is supported by President Biden and Gov. Chris Sununu alike. Sununu also supported a state gas tax holiday earlier this year but proposals failed to move through the legislature as conservatives mocked the proposal as a “gimmick”.

Drivers in Littleton can capitalize on the gas rollback roadshow Thursday morning. Americans for Prosperity will be delivering more discount gas from 11:00 to 12:30 at Simon’s Market – Mobil on Route 116.