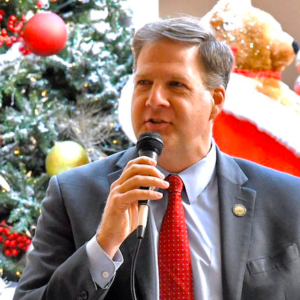 New Hampshire Journal managed to track down Gov. Chris Sununu in between Christmas shopping for deli meat at the Market Basket and buying “I’m An Exit 3 Kid” t-shirts as stocking stuffers. We asked him about 2019, how New Hampshire politics look in 2020, and his New Hampshire Christmas memory.

NHJournal: So how was 2019 for Governor Chris Sununu?

SUNUNU: 2019 was a very good year. Our economic boom continued, particularly compared to the rest of New England. We have more people working than ever before, we’re the best state for return on taxpayer investment, and we’re the most popular place in the Northeast for millennials to move. We’ve had a great year for the economy and that doesn’t happen by accident. We had to stave off some aggressive legislation from the Democrats, but we did it. We built on the model from 2017 and 2018 and I expect to see our success continue through 2020.

NHJ: Here at NHJournal, we think the seminal moment of 2019 for New Hampshire politics—not presidential, #FITN politics, but state politics — was when House Minority Leader Dick Hinch held the GOP caucus together to uphold your vetoes. Do you agree?

SUNUNU: It was a very important moment. The minority had the power of the majority because they stuck together. I’m not going to say the Republicans won because what really happened is New Hampshire won. When people say to me, ‘You know, 57 vetoes is alot!’, I remind them that none of those 57 pieces of legislation had ever come across a previous New Hampshire governor’s desk. That’s how extreme some of it was. So yes, we stood together.

NHJ: And how many threats of broken legs or sudden state inspections of their homes or businesses did it take to get the House Republicans in line?

SUNUNU: Good leaders don’t have to threaten. I don’t twist arms. We don’t operate that way. The Democrats, now they were really twisting arms this session, which is why you have members who were in red districts casting votes for tax hikes and other things. There were Democrats in the halls literally crying after the budget vote because of threats they’d gotten from leadership.

NHJ: One big change some political observers have noticed already: Chris Sununu actually raised money! You had a big campaign finance fundraising report. How did that happen?

SUNUNU:  I don’t focus that much on fundraising, it’s true. I focus on doing the job over fundraising. But I had a lot of help in 2019.

SUNUNU: The Democrats. They really helped me out. When they kept sending screwy legislation to my desk, I had people tracking me down saying ‘We’ve got to keep you in office!’”

NHJ: Still, it’s a common criticism that the New Hampshire GOP is struggling financially and you haven’t been a strong fundraiser. And now you’ve got months of Democratic presidential candidates campaigning across the state and helping the Democratic state party raise money. Should Republicans be worried?

SUNUNU: We’re going to be fine. We’ll have the money we need. It’s going to be like 2016. Trump is going to play here and he’s going to win. And money’s going to come in because we’re a purple state, because…

NHJ: Wait—did you say Trump is going to win?

SUNUNU: Trump is going to win. He barely lost last time and now he has a strong economic record to run on. He’s got results now that are hard to argue with: More jobs, more income. He gets credit at the national level just like our team gets credit at the state level.

NHJ: On a completely unrelated subject, what’s your favorite memory from a Christmas here in New Hampshire?

SUNUNU: When I was a kid my family was friends with [Bill and Synda] Zeliff who owned the Christmas Farm Inn up in Jackson. It was a great family time. My dad could get away from the office for a couple of days, we did a lot of skiing, it’s a beautiful area, we just loved it.

As for a special present, after years of asking and my parents ignoring me, Santa finally stepped in and I got a BMX for Christmas when I was about 10. As soon as I could, I built a dirt ramp out by the neighbor’s yard and within three months I was covered in scars.

The BMX survived, but I didn’t.