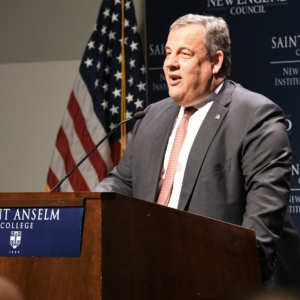 Chris Christie in NH: Tough on Trump, Smiles for Sununu

Former New Jersey Gov. Chris Christie prides himself for his straight talk, and he had plenty of it for Donald Trump, Joe Biden, and the potential 2024 GOP field of presidential candidates.

In fact, the 2016 presidential candidate had tough words for just about everyone in politics during his visit to New Hampshire Monday — except Gov. Chris Sununu.

“Gov. Sununu has done a great job here, and I have a lot of respect for him,” Christie told NHJournal during a press gaggle after his Politics and Eggs speech at St. Anselm College.

And despite being a national co-chair (along with former Secretary of State Mike Pompeo) of the National Republican Redistricting Trust, Christie declined to criticize Sununu for his decision to veto the congressional districts drawn by the GOP-controlled legislature. That map would likely give New Hampshire its first federal election win since 2014, which would double the number of New England Republicans in Congress.

“I have a lot of confidence in Gov. Sununu, and I’m sure that he’ll be able to work it out with the legislature,” Christie said regarding redistricting. 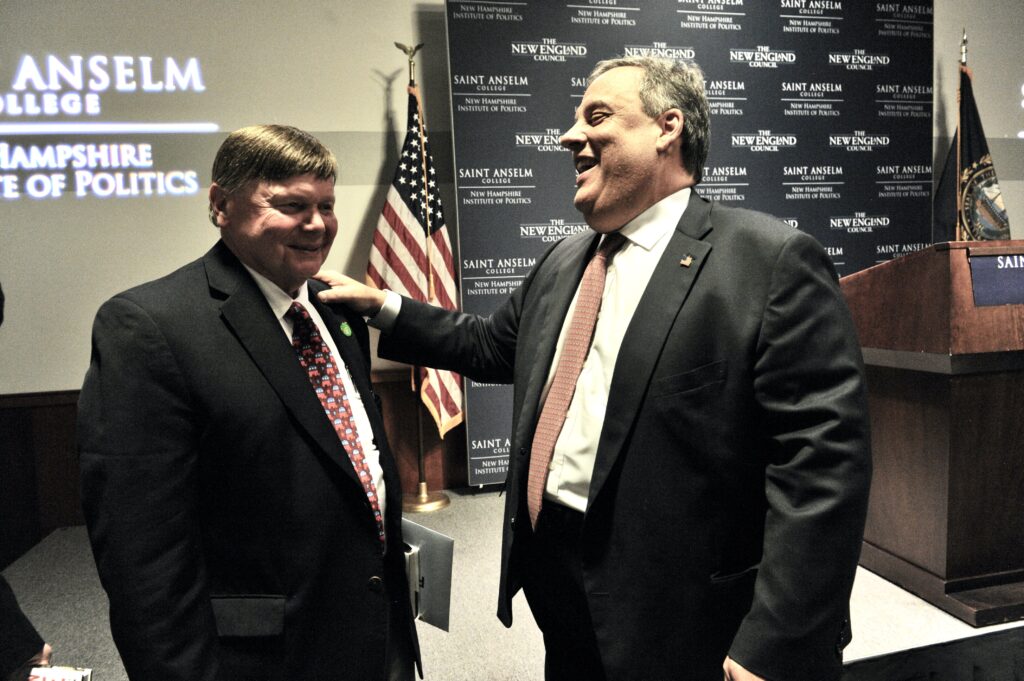 Christie did not express much confidence in his fellow Republicans considering a run for president in 2024. He made no secret that he is considering it himself — as evidenced by his appearance in the First-In-The-Nation primary state, and he threw down a challenge to potential GOP candidates sitting on the sidelines waiting to find out what Trump will do: Man up, or get out.

“I think those potential candidates who’ve said, ‘I’m running unless he’s running,’ are disqualified,” Christie said. “If you don’t think you’re good enough to be president, then don’t run. But if you feel you’re the best person to be president, it shouldn’t matter who the hell else is in the race.”

And Christie issued a warning to his would-be rivals. “If they’re going to get into a primary fight with Donald Trump, they’d better be ready. Because it will not be tiddlywinks. It will not be softball, it will be hardball. And you’ve got to be willing to stand up and speak your mind and tell the truth — about everything. Not just about the stuff you’re comfortable telling the truth about.”

For Christie, one of those difficult truths is the former president’s behavior since losing the 2020 election. After reminding the audience he was “the first mainstream Republican to endorse Donald Trump in 2016” and even helped him with debate prep by playing Hillary Clinton (“she’s never been better!”), he rejected Trump’s stolen-election story.

He went on to denounce Trump’s behavior on January 6. “You cannot sit in the White House and watch that happen and not stand up and say, ‘Stop.’ And I tried to call the president that day. He would not take my call, because he knew what I was going to say,” Christie said.

Christie’s critiques were bipartisan. He scoffed at the notion President Joe Biden would seek a second term. “I can’t read his mind, but I watch him. And I can’t imagine it,” Christie said. “As we watch him function in his job now — do we look at this guy and think, ‘I could see him coming up here in two years, trudging through the snow, going door-to-door, making school visits, and standing up in a Democratic debate? I don’t see it. I don’t think he’ll be up for it.”

Christie’s visit is being viewed by many in Granite State politics as the unofficial beginning of the 2024 primary. The Politics and Eggs events, an initiative of The New England Council and The New Hampshire Institute of Politics, is a must-stop on the presidential campaign circuit.

Alan Glassman, a New Hampshire GOP activist who has attended many of these events, said he was impressed by Christie’s performance. “He’s the best I’ve ever seen him. His message that the party has to be ‘for us’ and not just ‘for me’ — for one person — that was very good.”

Christie also toed the line on the New Hampshire primary. Asked about Democrats’ efforts to make New Jersey the first state to vote in the presidential cycle, the former Garden State governor rejected the idea out of hand.

“When I was the governor of New Jersey, I never suggested that New Jersey should jump in front of New Hampshire, and I don’t think it’s what we should do,” Christie said. “If for no other reason than New Jersey won’t allow you the same type of intimate interaction you have here where voters really get to know the candidates.”

“The Trump lane, which no one but he can mobilize; the ‘Trump lite’ lane, which stays on track on policy; and then a third lane, perhaps the traditional Republican lane, one that feels more like a Reagan, Bush, [N.H. Sen. Judd] Gregg type lane,” Rath said.
“The third is where a Christie might run. And the third lane is where the FITN primary might matter most in thinning down that field. That’s why Christie was here, and I expect he will be followed by others of that ilk. New Hampshire gives them their best shot to break out, and I think we will see more of them to come.”

Another New Hampshire GOP insider who asked to speak on background called Christie “thoughtful and refreshingly direct,” but wondered if his “180-degree Trump conversion” might not be too convenient.

“Still, it reflects his calculation that 2024 New Hampshire primary voters may want a Sununu Republican as the nominee. But if that’s the case — why not Sununu?”