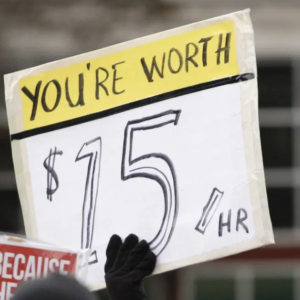 A report from the nonpartisan Congressional Budget Office released Monday says raising the minimum wage to $15 an hour could cost 1.4 million jobs by the end of Joe Biden’s first term. It’s just the latest economic analysis to support claims by opponents of the move that, whatever its other impacts on the economy, a higher minimum wage means fewer jobs.

But some New Hampshire Democrats are still pushing for the increase, despite the dismal numbers.

The study confirms a 2019 CBO report that a minimum wage hike would be a job killer, and would be particularly harmful to people in industries that are already struggling.

And a 2017 Harvard study found that a higher minimum wage will drive some restaurants out of business.

At the federal level, support for the minimum wage hike appears to be waning.

President Joe Biden was pushing hard for a minimum wage hike just days ago. Despite the fact it plays no role in fighting the pandemic, he included the $15/hour mandate in his COVID relief plan. Last week he tweeted “It’s long past time we raise the minimum wage to $15 an hour.”

But in an interview on Sunday, Biden acknowledged the wage hike likely won’t be part of the COVID package Congress sends to his desk. “I put it in, but I don’t think it’s going to survive,” he told 60 Minutes.

On Monday, White House spokesperson Jen Psaki tried to walk that back, claiming the president was talking about the senate’s rules.

“He believes that any American who is working a full-time job trying to make ends meet should not be at the poverty level.  And it’s important to him that the minimum wage is raised,” Psaki said. “He was referring this weekend to … the parliamentary process.”

“The President is — remains firmly committed to raising the minimum wage to $15,” Psaki added. Even after the CBO report was released.

It’s true that there are parliamentary issues in play. Even some Democrats who want to push the wage hike through via the reconciliation process, like Speaker Nancy Pelosi, concede it’s possible the policy falls outside the rules of what is allowed in a budget reconciliation.

Progressives like socialist U.S. Senator Bernie Sanders dismiss those concerns and want to keep pushing for the wage hike. And many New Hampshire Democrats appear to agree.

“New Hampshire needs a raise, desperately,” state Rep. Kris Schultz, D-Concord, said during a House hearing last week. She’s sponsoring a state law raising the wage to $15/hour. “We are a wealthy state, but over 130,000 people make less than $15 an hour.”

Senate Democrats like Senate Minority Leader Donna Soucy and Sen. Lou D’Allesandro, both of Manchester, support a more modest $12 minimum wage. They, too, are pushing ahead in the face of the economic science.

Meanwhile, virtually nobody in New Hampshire currently works for minimum wage. The state has no minimum wage, defaulting to the federal mandate of $7.25 per hour, and yet it’s one of the wealthiest states in the nation and its workers earn higher than average wages.

Interestingly the same day Schultz and her allies were pushing the minimum wage hike in Concord, both U.S. Senators Maggie Hassan and Jeanne Shaheen were voting against a federally-mandated $15 minimum wage during the so-called “Vote-A-Rama” as part of the reconciliation process. And even Sen. Sanders was with them, acknowledging this isn’t the ideal time for the wage hike.

“I will support this amendment because nobody is talking about doubling the federal minimum wage during the pandemic,” Sanders said.