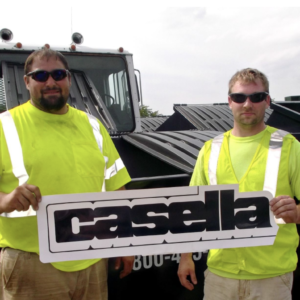 On October 13, NHJournal published an opinion piece from the North Country Democratic Caucus (NCDC), which is comprised of six state representatives from Grafton County. In their eagerness to curry favor with a small group of Grafton County voters, they have ignored the truth and disparaged an essential service provider in New Hampshire.

We should expect far better from our elected officials.

As the only integrated waste and resource management company based in New England, Casella Waste Systems has been in the business of finding solutions for the management of its customers’ solid waste for the past forty-five years.

Our services range from counseling many of our customers on how to create less waste, to industry-leading recycling and diversion programs, to disposal of the remaining waste in safe, environmentally secure landfills.

We spend millions of dollars every year protecting our natural environment and human health from the waste that all of us produce, while simultaneously exploring new ways to reduce waste and find higher and better uses for recyclable materials.

Casella has done business in New Hampshire for almost 30 years. We employ about 200 New Hampshire residents. Currently, our NCES landfill in Bethlehem is providing safe and secure disposal for more than 50,000 households and businesses across 150 New Hampshire towns, which accounts for more than 70 percent of the waste accepted there.

Our Bethlehem facility will be out of disposal capacity in 2026. Because the town has decided not to allow future expansion at the site, our engineering and compliance team began looking for another location in the state that would be suitable for a landfill. In 2018 we entered into an option agreement for some property in an isolated part of Dalton after determining it was the most suitable location.

Engineers, hydrogeologists and wetlands scientists have been studying the property carefully since then, and Casella recently filed its first application for a state permit for what it calls the Granite State Landfill project.

The NCDC argues that the project should not be developed, but virtually everything the NCDC presents as facts to support its argument is completely inaccurate, incomplete, or refuted by scientific and regulatory findings.

Most notable, though, is the utter hypocrisy of their argument.

The representatives claim that they oppose the Dalton project because landfills “pose a threat to our way of life in the North Country” and “a landfill in Dalton will set a precedent that [the] North County is for sale for environmentally destructive ventures.”  In the very next breath, however, they claim that the “solution” to the need for waste disposal capacity is the Mt. Carberry landfill “in Berlin.”  The landfill is actually in Success Township which is right in the middle of . . . the North Country.

Mt. Carberry is also adjacent to the Appalachian Trail, which is why the “revamped House Bill 1319” excludes the Trail from the prohibition language. What is it about a landfill near the Appalachian Trail that is somehow less dangerous or less despicable than one that is sited down gradient from a state park and buffered by natural ridgelines and forest?

Even if you don’t mind the hypocrisy of those statements, it doesn’t change the fact that based on its most recent application for expansion Mt. Carberry will not increase its yearly disposal acceptance rate above current levels.

The NCDC keeps the falsehoods flying from there.  These include:

The NCDC acknowledges that “trash needs to get disposed of,” but the reader of their op-ed will search in vain for any plan to provide disposal capacity. Instead of providing concrete solutions to the need for disposal capacity, the NCDC offers up just vague and meaningless slogans. These include suggestions that New Hampshire violate federal law and prohibit waste originating from out of state, pass a “bottle bill,” practice “innovation,” and “protect our investments” and “our environment.”

Complex issues such as waste and resource management require highly complex solutions that are essential to protecting the health and safety of the public and our environment. Casella Waste Systems is committed to providing those complex solutions while creating and sharing value with its customers and communities and has been doing so for more than 30 years in New Hampshire.

The North Country deserves representation from people who are willing to understand and act on facts instead of preying on fears.