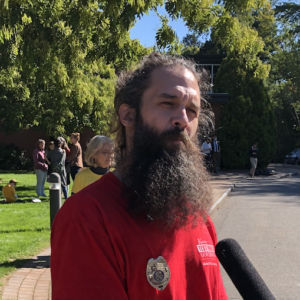 The fallout from Wednesday’s canceled Executive Council meeting continues, with a new criminal investigation, plans to halt public meetings at Saint Anselm’s, and unanswered questions about the state government’s response to the raucous protests.

The New Hampshire Attorney General’s Office announced Thursday it plans to review the actions of the anti-vaccine protestors who shut down Wednesday’s Executive Council meeting at Saint Anselm’s New Hampshire Institute of Politics.

“The scope of the review is to determine if any individuals violated any criminal laws,” Attorney General John Formella’s office said in a statement.

Wednesday’s Executive Council meeting was canceled after anti-vaccine-mandate protesters took over the meeting before it could begin. There were a few dozen protestors in the NHIOP meeting space, but according to Neil Levesque, executive director of the New Hampshire Institute of Politics, some 200 more were outside the building.

A small contingent of protestors inside the meeting room began shouting conspiracy theories and making vaguely threatening statements directed at state employees. Instead of being confronted by the dozens of law enforcement officers on hand, the handful of vocal protesters was allowed to continue to stalk the room, making state employees fearful.

After nearly an hour of the group shouting slogans and conspiracy theories about the COVID-19 vaccine, Republican Councilor Dave Wheeler announced state employees felt unsafe and left the meeting. That effectively prevented the Council from conducting business.

Most of the disruptions were caused by just three or four anti-vaccine protesters, including convicted felon Frank Negus Staples. Staples, who’s also a regular outspoken presence at Nashua Board of Education meetings, was highly agitated and shouted at state employees that he knew where they lived.

Dozens of law enforcement officers were at the meeting — up to 50 according to one source — but they took no action to end the disruption. Based on both video and live reporting, it appeared that if the handful of vocal protesters had been removed by law enforcement, the meeting could have been held as scheduled.

Why didn’t the police act? Because Gov. Chris Sununu decided to end the meeting instead.

“The Governor conferred with the Executive Councilors, State and Local Police, and the event organizers and made the decision to postpone the event due to concerns that safety of everyone involved may be further compromised if tensions were to escalate,” Sununu spokesperson Ben Vihstadt told NHJournal. “While it may have been possible to begin removing disruptive and disorderly individuals, the concern remained that it could have escalated an already difficult situation in such a small space further compromising the safety of everyone involved.”

Paul Raymond, spokesman for the New Hampshire Department of Safety, said the possibility of arrests was weighed against First Amendment considerations.

“Decisions on whether to effect an arrest require officers to carefully consider the fundamental rights granted to protesters by the First Amendment, the text of the criminal code, as well as the safety and security to other bystanders and attendees,” Raymond said.

There is no First Amendment right to disrupt public meetings and disruptive protesters are commonly removed by law enforcement from public hearings. However, because the governor chose to preemptively cancel the meeting before it began, it may be difficult for Formella to find laws they violated.

While neither Raymond nor Vihstadt would answer how many law enforcement officers were present at the meeting, New Hampshire Journal observed dozens of New Hampshire State Troopers and Goffstown Police Officers in attendance. That was a marked increase from previous Executive Council meetings.

“The Department of Safety does not publicly discuss operational details or tactics,” Raymond said.

Vihstadt said there were indications before the meeting that protesters would be present, and law enforcement was alerted to the possibility of disruption.

“Additional law enforcement support was requested over the previous few days as it became clear that protesters would be present,” Vihstadt said.

Many of those protesters also participated in protests outside Sununu’s home.

Sununu was not present in the auditorium for most of the protest. He was present for an earlier breakfast meeting but stayed in a back room while the protesters ratcheted up their antics. He was not present when Wheeler announced the meeting was canceled, even as protesters demanded to know where he was. Vihstadt said Wheeler offered to go out in place of Sununu.

“Councilor Wheeler offered to notify the crowd of the meeting postponement when a few of the councilors returned to collect their personal belongings,” Vihstadt said.

One of the lead agitators at the meeting, Terese Grinnell, was in communication with Sununu and his staff in the days leading up to the meeting. Grinnell, a registered nurse, led the protestors with misinformation that the COVID-19 vaccine kills people, that the federal government wants to put people into concentration camps, and that there will be a second civil war over the vaccine mandates.

“The Governor is always willing to discuss issues with constituents especially when there is a lot of misinformation being relayed.  He or his office has had communication with various individuals across the state with similar concerns to help explain the process and dispel some of the rumors surrounding these contracts and the benefits of moving them forward,” Vihstadt wrote.

Sununu and his team have not been in contact with Staples, Vihstadt said.

The protesters were reportedly upset over the $27 million federal contract to help distribute the COVID-19 vaccines. As Sununu acknowledged Wednesday, if the Council meeting had been held, it’s possible the contract would have been voted down.

On Thursday, Levesque announced that, in the wake of Wednesday’s events, the NHIOP is canceling all “public meetings where we are bound by the law in the way we proceed,” though events open to the public will continue.

“At this point, with the way our politics are, having public meetings is just not compatible with places like St. Anselm College,” Levesque told NHPR.

In addition, Friday’s scheduled meeting of the Joint Fiscal Committee to consider those same contracts has been canceled. Sununu canceled a Super 603 event set for Walpole this weekend as well.