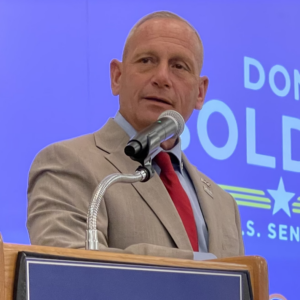 I was really annoyed by the NHJournal’s recent article in which the New Hampshire Republican establishment freaked out and unleashed an unfair and unwarranted attack on Don Bolduc. All because he had the audacity to announce that he is running for vice-chair of the NH GOP.

Methinks they doth protest too much. What are they afraid of?

First off, they are all cowards for not revealing their names after making disparaging remarks about a man who has served his country with honor and who only wants to continue that service at the civilian level as a servant leader for our party.

Secondly, they are blind to the reality that “The General” is super popular and respected by the 400 or so state committee members who will be voting for the position on January 28, 2023. The vast majority of state committee members that I have spoken with view Don Bolduc as someone that has integrity, is accessible and that can provide true and honest, unfiltered leadership.

It may be wishful thinking on the GOP establishment’s part but, based on the same old tired crony names that they will propose for leadership positions, they are “whistling past the graveyard.” There are many voting members in the 14 city and county Republican committees who were disgusted with current Chairman Stephen Stepanek and Vice-Chair Pamela Tucker. Despite their claiming “mission accomplished,” this last election cycle was a near disaster for the New Hampshire Republican Party.

We lost seats in the New Hampshire House when we were supposed to gain about 20-25 seats.

These anonymous Republican “pros” belittled Don on his inability to raise funds for his Senate campaign, when in fact it was they, the Establishment, that did not support Bolduc. All the while with a wink and a nod, unofficially endorsing Corky Messner in 2020 and then state Sen. Chuck Morse behind the scenes in 2022. It is a moot point anyway because the vice-chair does not have to raise funds. That is the chairman’s prime responsibility.

They try to make Don out to be a sore loser just because he is running for another office after a loss. I hardly think Don would be the first person in politics to not give up and go away just because of a previous loss. There are many great people in our history that we would not have had in office had they not kept on trying. He is a warrior, and warriors don’t quit when they have a just cause.

I will be voting for Chris Ager for chairman and Don Bolduc for vice-chair because I believe they will keep each other in check and provide the excitement and trust in the NH GOP leadership that was totally missing for these past four years with this outgoing regime.

Between the two of them, there is something there for every Republican to like.

Jose' Eduardo Cambrils is an NHGOP state rep from Canterbury/Loudon. He wrote this for NHJournal.com.