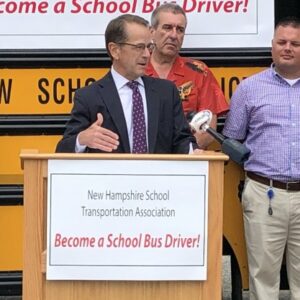 From southern California to the Northeast, a nationwide bus driver shortage has reached a crisis level for school districts across the country, the worst some have ever seen. Thousands of bus driver positions have yet to be filled as the new school year looms.

Education officials from New Hampshire gathered in the town of Bow last week to address the serious shortage in their state.

“We want to see all our students back for in-person instruction, and part of making that happen is making sure we have bus drivers,” said Commissioner of Education Frank Edelblut. He says the state’s “chronic” driver shortage from past years has become “an acute problem” that’s spread throughout the state, rather than being isolated to specific districts.

In the Chapel Hill-Carrboro City (N.C.) Schools district, the school board just approved $2,000 signing bonuses for newly-hired drivers to address the severe shortage.

And in Lawnside, N.J., the First Student bus company just increased its sign-on bonus to up to $5,000. Still, shortages remain.

David Palencia is a compliance officer with JFK Transportation, a company that runs more than 100 buses for Santa Ana (Calif.) Unified School District. Because of COVID-19 restrictions, the buses are limited to half their capacity of students. Palencia said the company could easily double the number of buses they send out to 200, but drivers just aren’t available.

In the past they would get 10 to 15 applicants a week, Palencia added. Now they might get that many per month. “I hear it’s very common, the restaurants—everywhere,” Palencia said. “People just aren’t applying.”

They certainly weren’t applying at a recent jobs fair in Orland Park, Ill. Only a handful of applicants showed up for $18 an hour jobs, leaving this Chicago suburb school district scrambling.

“Usually, we teeter around 200 employees coming into the new school year,” local bus company assistant manager Carly Richardson told the Chicago Tribune. She says their driver numbers are down from 192 before the pandemic to 133.

Back in the Granite State, Sandra Rose of the New Hampshire School Transportation Association (NHSTA)—a trade association— said there are hundreds of open bus driver positions around the state. She urged local residents to step up and help fill the gap.

“What better way to serve your community than drive a school bus in the school district where your children attend?” Rowe asked.

Karen Holden, vice president of the NHSTA, said the current problem has roots in the pandemic last year. Many homemakers and retirees who drove school buses were forced to quit out of health care and childcare concerns. They haven’t come back.

“When COVID-19 came in we lost a lot of drivers—many more than in past years,” she said. “I have been in the industry 25 years and this is the worst I’ve seen in all my years.”

According to the American School Bus Council, school buses transport more than 25 million children to and from school every year, traveling approximately 5.7 billion miles annually on more than 480,000 buses.

Nevertheless, industry officials say, their companies will find ways to make sure children get to school safely.

“We’re always going to be there to get students to school,” Holden said. “What it might mean is their bus ride to school will be a little bit longer.”

Matthew Liptak is a news, feature, and content writer and editor from Maryland. He wrote this for InsideSources.