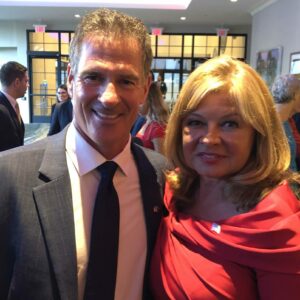 In an internal campaign memo obtained by NHJournal, the Gail Brown Huff campaign says its fundraising success and national attention make the former U.S. senator’s wife “the only candidate with the demonstrated fundraising ability, forward momentum, and support necessary to win in November 2022.”

“During the first three weeks of the campaign, Gail raised just over $220,000. This quarter, Gail raised over $340,000 – an increase of $120,000,” the memo reads. “While Gail’s primary opponents may loan themselves money or transfer themselves funds from last cycles’ PAC, Gail is committed to working for every dollar and earning the support of her voters – not buying it.”

The reference to transferring funds from the last cycles’ PAC is directed at Matt Mowers, the 2020 GOP nominee widely viewed as the frontrunner. His campaign announced more than $400,000 raised during the fourth quarter of 2021 and a four-month total of nearly $850,000.

The Brown campaign memo also says the candidate is “drawing national attention and support from key conservative voices. Gail Huff Brown is a recognizable force for the America First agenda and as a result, most recently, Sean Hannity said Gail’ is gonna do a great job and we wish her the best.'” It also lists “key advisors to President Donald J. Trump have put their full support behind Gail Huff Brown,” including former Speaker of the House Newt Gingrich and South Carolina Sen. Lindsey Graham.

However, many GOP insiders believe it is unlikely Brown will get Trump’s backing in the primary. Brown’s connection to the former president comes through her husband, Scott, who served as an ambassador in the Trump administration. However, he also harshly criticized Trump over the January 6 riots, telling CNN Trump “absolutely bears responsibility” for the violence.

In addition, Trump was a strong backer of Mowers in 2020.

And while Huff’s fundraising is solid, her fellow first-time candidate Karoline Leavitt reported $250,000 in the fourth quarter and a total of $583,000 thus far in the race. Leavitt, a 24-year-old Trump White House assistant press secretary, doesn’t have a former U.S. senator in the family to help fundraise, either.

Also in the race is Julian Acciard, who has reported raising less than $11,000 thus far.

“Gail Huff Brown will have the resources to defeat Chris Pappas in November and she is the only candidate who can. The momentum is clearly on her side.”