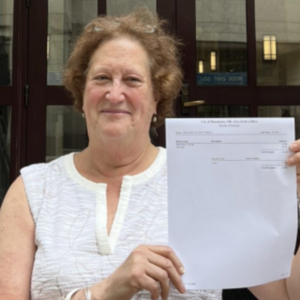 Less than 24 hours after New Hampshire Secretary of State David Scanlan announced plans to continue the recount in the Manchester Ward 6 House race, a prominent Democratic attorney announced he intended to ask a judge to block it.

In an email to the Merrimack Superior Court Friday morning, William E. Christie, a partner with Shaheen & Gordon, P.A. wrote, “I am writing you [sic] inform you that on behalf of an interested party, I likely will be filing an emergency petition and expedited request for TRO and Preliminary injunction later this afternoon. The matter involves the recounting of votes scheduled for Monday, November 21, 2022 at 4 PM.

“Accordingly, we will be requesting a hearing on the TRO and Preliminary Injunction to take place before 4 PM on November 21, 2022.”

The email was copied to the Attorney General’s Office and the counsel for the New Hampshire Republican Party.

On Monday, Democratic hopes of winning control of the House of Representatives were boosted when a recount appeared to show incumbent Republican Larry Gagne lost 22 votes, handing a one-vote victory to challenger Maxine Mosley. However, sources close to the process said it now appears a stack of ballots was missed in the recount.

On Thursday, Scanlan released a letter explaining why he was continuing the recount.

“The routine reconciliation process indicated that reconciliation and recount number were not equivalent,” the statement read. “The total number of ballots cast and counted for the office of governor in this district is greater than the total accounted for so far for the [Gagne v. Mosley] race. This indicates some ballots have not yet been counted in the recount.”

Republicans say they are confident when all the votes are counted, Gagne’s lead will remain.

Christie, who is married to Democratic Executive Councilor Cinde Warmington, is no stranger to partisan politics. In 2020, he was honored at the New Hampshire Democratic Party’s McIntyre-Shaheen Dinner with the Dunfey-Kanteres Award for his longtime work on behalf of the party.

Republicans called the move a partisan attack on election integrity.

“It is not surprising that Democrats don’t want to finish counting all the votes,” said Rep. Ross Berry, a Republican who also represents the same part of Manchester. “Instead of listening to the will of the voters of Ward 6, they would rather try and prematurely stop the count which currently gives them a lead.

“It is a shameless and openly partisan attack on our democratic process and brings into question why they are trying to deny the result of an election.”

New Hampshire Democrats made accusations of “election denial” a key part of their successful campaign attacks on the three Republicans running for federal office in the midterm elections earlier this month, arguing that refusing to accept legitimate election results was “a threat to democracy.”

Asked by NHJournal if he supported the effort to prevent the recount from continuing, New Hampshire Democratic Party Chair Ray Buckley declined to respond. However, state party comms director Colin Booth released a statement supporting the effort to block a recount.

“The bottom line is that the votes…were counted twice already, and New Hampshire election laws do not allow for anyone…to conduct recount after recount until they achieve their desired result,” Booth said.

In his email, Christie said he was representing “an interested party,” which could be Mosley or the Democratic Party. On Election Day, the courts set up contact with lawyers representing the two state parties in case they needed to litigate issues. Christie was the Democrats’ lead contact.

Christie did not respond to an email requesting comment.