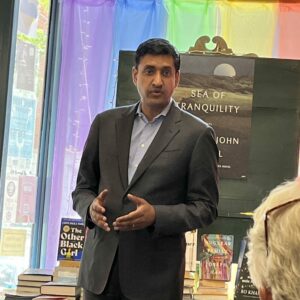 Congressman Ro Khanna, who represents California District 17 in the Silicon Valley region, visited Berlin, N.H. in early November to meet with a gathering of local community activists and elected officials. He is perhaps best known for recently chairing Bernie Sanders’ 2020 presidential campaign and acting as point man for the Biden administration’s negotiations with Sen. Joe Manchin and others to finally pass the Inflation Reduction Act with both record climate action and pharmaceutical price reductions.

More recently, he has helped expose the oil industry’s duplicity in misleading the public on the causes of climate change and is promoting a windfall profits tax on inflationary price gouging to reimburse Americans for exorbitant gasoline costs. Of course, every time a national political figure visits New Hampshire before a presidential primary, it is assumed they are entertaining the idea of running. Khanna did not dispel that suspicion except to say he has no intention of opposing Joe Biden.

The group included several Berlin-area natives, activists, and elected officials, some of whom had spent years in local industry, retail, and government. The congressman wanted to hear the story of this great manufacturing hub that has recently declined in both wealth and population. Ro learned, firsthand, about the glory days of “The City that Trees Built,” from the time in which it was the pulp and paper capital of the world with scores of associated manufacturing plants. He got an earful about how government policies over recent decades failed to stem the exodus of manufacturing jobs, instead favoring those who profiteered off of Berlin’s demise at the expense of its workers.

Khanna was impressed by the story of Neil Tillotson of the Balsams, the premier grand hotel in northern Coös County, who used his ingenuity to develop a local industry to employ his hotel workers in the off-season making latex gloves. Khanna noted that he endorsed Biden’s recent implementation of the Defense Production Act to engage its current offshoot, American Performance Polymers, in the manufacture of gloves and other protective equipment to replenish the American stockpile for any future epidemic, saying that national security expenditures should be directed in this way to revive local economies in communities that have been bulwarks of American patriotism and ingenuity in the past to provide for America in her time of need. He called that “economic patriotism,” noting that recent supply chain bottlenecks exacerbating inflationary pressures, like the microchip shortage, have exposed the national security risks of our over-reliance on foreigners for essential components of our technology, touting the importance of passing the recent Chips Act and praising this administration for generating another 700,000 manufacturing jobs.

As we sat together atop Cates Hill in Berlin, from where one can actually see 36 wind turbines and two solar arrays, Khanna was literally shocked to learn that, despite having four hydro plants, a battery storage project, a biomass plant, and all those wind turbines, the Coös transmission loop is preventing several more proposed renewable projects from coming online due to its inadequate capacity. At the same time, our governor continually vetoes renewable energy bills, claiming that he will not support energy “subsidies.”

However, Khanna pointed out that, conversely, it is fossil fuel that is the most heavily subsidized energy industry. Moreover, it generates immeasurable uncaptured costs that burden us all in the way of poor health and environmental destruction. We pointed out that, as a result of Gov. Chris Sununu’s vetoes of renewable energy legislation, New Hampshire now has the lowest proportion of renewables in its energy mix of any New England state, resulting in the highest regional utility costs for ratepayers.

We told him we would seek help to explore a path for Coös to harness federal infrastructure money to upgrade the Coös loop to spur on renewables projects-in-waiting, despite our intransigent governor. Khanna emphasized that we should focus on helping fellow Granite Staters understand that growing green energy locally was not only a proven job-creation strategy, and critical to human survival, but a prime example of Economic Patriotism as it divests us from reliance on the world’s worst dictators. He added he supports banning U.S. oil exports during energy emergencies until we successfully transition away from fossil fuels so that we don’t exacerbate domestic inflation while fossil fuel monopolies and OPEC oligarchs profit from manipulating global supplies.

In referencing historical examples of economic patriotism, Khanna reminded us of how Americans successfully mobilized under FDR to support the war effort, with the federal government investing in manufacturing while American women joined assembly lines to build planes to permit their men to fight the fascists. He emphasized this is the kind of collective effort that helped us become a manufacturing dynamo, giving birth to the middle class and a higher standard of living. This is the kind of patriotic spirit he wants to revive in America by identifying the intersection of economic and patriotic goals that go to the root of our identity as Americans, ones that will unite us to strengthen our vitality while reconstructing a shared vision for the country.

No guest left disappointed. Afterward, true to form, Khanna proceeded on to a Manchester gathering where he spoke inspiringly about our meeting in Berlin and of what he had learned from us about its proud manufacturing history and our vision for the future potential of Coös.

He is surely seeking to play the role of a catalyst for American unity, something few have succeeded at in recent years. Judging by the response here, perhaps its time has come.