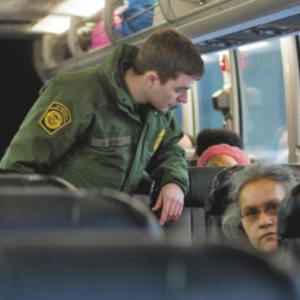 While the nation’s attention is focused on the treatment of illegal immigrant parents and children at the southern border, another battle is being waged at the northern border.

This weekend, Customs and Border Protection agents were stopping cars on I-93 near Woodstock, N.H.,  their second such checkpoint this year. According to reporting by the Union-Leader, the CBP has six checkpoint events scheduled for New Hampshire this year.  And the New Hampshire ACLU is not happy about it.

Giles Bissonnette of the NH-ACLU says the checkpoints are wrong and that state officials should demand they be stopped immediately.
“People should not have to answer to federal agents as they go about their personal business,” he said.

He’s not too happy about what’s happening next door in Maine, either, where CBP agents questioned people boarding a Concord Coach Lines bus in Bangor over Memorial Day weekend. A video taken by one of the passengers shows a bus company employee claiming riders had to be citizens to board the bus.

“It is inexcusable for Concord Coach to allow border patrol agents to question their own passengers about their citizenship and immigration status,” Bissonnette said. He also called the CBP’s actions “morally repugnant.”

“People should be able to take the bus without fear of unfounded interrogation and deportation. Concord Coach has the right to say no to border patrol.”

Border security advocates argue that the only people at checkpoints who have to “fear” deportation are people in the US illegally. Under federal law, CBP Border Patrol has the right to board and search any vehicle within a “reasonable distance” of the country’s boundaries, which is legally defined as within 100 miles of the border.

What appears to be a surge in such activity along the US border with Canada is in fact a return to pre-Obama-era policies.

Former president Barack Obama had reduced the use of the bus and train checks in Canadian-border states. After the New York Times reported complaints from passengers on a Chicago-to-New York train, Obama, according to the Associated Press, told the Border Patrol in 2011 to stop checking people on buses and trains everywhere but the “100-mile zone” adjacent to Mexico, unless they had specific intelligence.

During the first eight months of 2010, the Border Patrol arrested 5, 125 people near the Canadian border. In 2016, the Obama CBP only arrested 1,687 during the entire year, a decline of more than 70 percent.  In 2017, the Trump administration arrested just over 2,400 people along the northern border–still well below 2010 levels.

Those numbers may continue to rise, however. On June 12th, the Department of Homeland Security released it’s “Northern Border Strategy.” The DHS identifies “the bi-directional flow of illicit drugs” as the most common threat, though it also mentions “potential terror threats…primarily from homegrown violent extremists in Canada.”

The border between Canada and the US is 5,525 miles, “the longest land boundary between two countries in the world,” the DHS document notes, and the Border Patrol union has been very clear in its desire to reverse the Obama-era enforcement policies. Expect to see more immigration enforcement activity along the northern border–but without the publicity or controversy of the southern border.