Booker Calls Trump’s Behavior In Whistleblower Case “Despicable,” Even As He Promotes Bipartisanship

While Washington, DC was glued to the TV watching Congressional testimony about the whistleblower complaint that’s inspired a new push for impeachment, Senator Cory Booker was on stage in New Hampshire calling for “patriotism over partisanship” and urging voters to set aside anger for love.

But in the press gaggle immediately afterward, Booker had his own partisan take on the allegations being leveled against President Trump by his fellow Democrats in the House.

“The news broke while I was speaking, so I just had three minutes to read through some top lines,” Booker acknowledged, “and my immediate reaction is that these revelations in the whistleblower report are explosive, and they are also equally sobering and true.  I think my emotional feeling right now is that this is a sad day for America.

“This is despicable behavior,” Booker added.

The night before, Booker used the same word to describe Trump’s supporters, telling MSNBC, “The people who are enabling [Trump], his moral vandalism in office… there is a cold, frigid place for them. They will go down in history as despicable actors. I have a very low regard for people who know he’s doing wrong but still defend him.”

Booker supports Speaker Nancy Pelosi’s decision to open a formal impeachment inquiry. “It gives us the best leverage to get to the truth… And I believe that now, even with this whistleblower report, we are still only scratching the surface of what went on.”

Booker admitted that, as of now, a two-thirds vote by his fellow senators to remove President Trump from office was unlikely, but he said the body still has a role to play.

“The Senate will investigate as well. We have an obligation to do that. And this is a president that is violating the Constitution of which all 100 senators took an oath to defend and protect. And there’s already been shown to be bipartisan efforts to get at the truth.

“This looks like a president who was abusing his office, trashing the Constitution and putting this nation at risk. So let’s continue the investigation and not rush to see this through a partisan lens.”

Booker’s comments were somewhat at odds with the message of bipartisan cooperation and national healing in his stump speech, and they reflect the views of nearly all of his fellow 2020 contenders, both Republican and Democrat.

The question political observers have is whether Booker’s message of love and cooperation matches the political moment, and if the impeachment fight will make it even harder for him to persuade Democratic primary voters to embrace a candidate of across-the-aisle cooperation. As Booker himself noted, he’s held more than 50 events in the Granite State; has more endorsements from New Hampshire elected officials  than any other 2020 candidate; and he has been very well received by Democratic crowds (the Politics and Eggs audience leaped to their feet in a standing ovation.)

And yet he’s lingered in the low single digits in New Hampshire polls.

“He’s been giving the same speech for months, and it’s ‘powered’ him all the way up to 3 percent,” one attendee told NHJournal. “It’s hard to see how doing the same thing but expecting a different result will get him to the top tier of candidates.”

Booker’s campaign has also been shaken by his public announcement that unless he can raise an additional $1.7 million by September 30, he could drop out of the race. When asked if this was a fundraising stunt or a serious claim, Booker answered: “Both.” 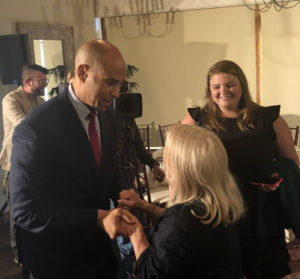 Sen. Cory Booker D-N.J.) speaks to an audience member at the Politics and Eggs breakfast in Bedford, N.H. on September 26, 2019 (photo: InsideSources)

Booker’s campaign manager Addisu Demissie insists that the fundraising appeal was not a gimmick. “Cory’s not going to continue running and consuming resources that are better focused on beating Donald Trump,” Demissie said last week.

Several Booker volunteers attending the New Hampshire event told NHJournal that Booker’s announcement had created problems for them as they tried to build his Granite State support. “It’s been a real problem,” one volunteer who declined to speak on the record without authorization from the campaign said. “I call people and ask them to join the campaign, and they say ‘why should I get on board today if he’s going to drop out tomorrow?'”

Booker’s campaign team is quick to point out that he’s more than halfway to hitting the $1.7 million target, and they believe the authenticity of his appeal will be rewarded by Democratic primary voters. “I can see how this might hurt another candidate,” another Booker volunteer told NHJournal, “but his honesty is what makes Booker different.”

But will that difference be enough for Booker to penetrate the Trump controversies and non-stop media coverage of impeachment with his positive message of progressive policies tied to national unity?  Booker insists that voters are smart enough to process both issues and he’s not going to back off his support for Democrats’ impeachment efforts.

“Every American right now — with this storm cloud hanging over the White House — deserves to know the truth,” Booker said.