Two new polls released Tuesday show the U.S. Senate race in New Hampshire is far from a lock for incumbent Sen. Maggie Hassan, even after millions of unanswered dollars spent by her campaign against challenger Don Bolduc.

And the new Trafalgar Group poll finds the race even closer, with Hassan up just 48.2 to 45 percent, with about four percent going to the Libertarian. 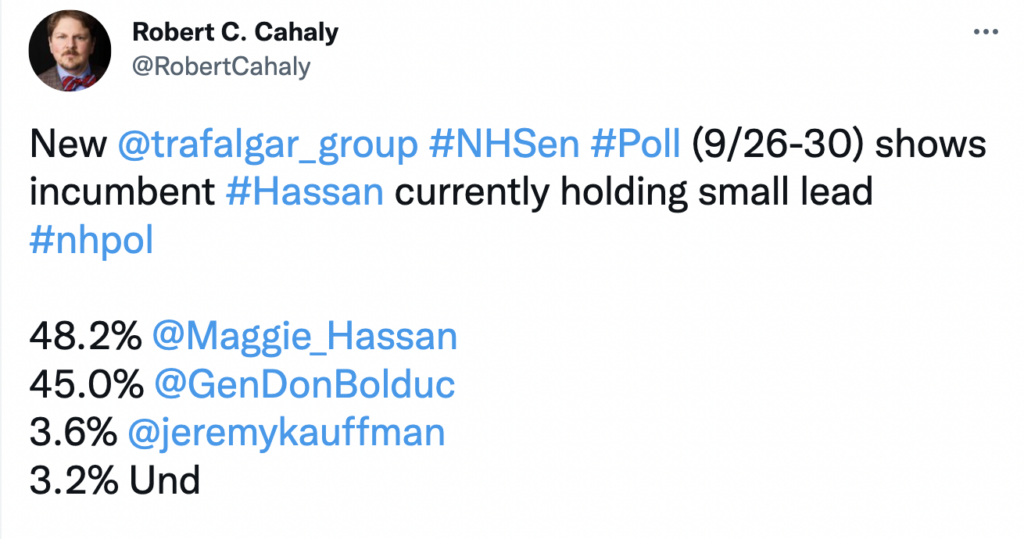 Robert Cahaly, head of the Trafalgar Group, told NHJournal the trend he sees is Republicans coming home to Bolduc after a bruising primary — “it’s happening even faster than I expected” — and the trend is going Bolduc’s way. He said the poll’s internals show nearly 70 percent of the undecideds disapprove of the job President Joe Biden is going — good news for Bolduc.

Just a week ago, the Suffolk University poll gave Hassan a nine-point lead, 50 to 41 percent.

Rick Wiley, a strategist for the Bolduc campaign, told NHJournal they are ready to rumble.

“Gen. Bolduc has done more public events in the past 36 hours than Maggie Hassan has done in the past 36 weeks. She’s a ghost and Granite Staters know it. She doesn’t have the courage to face voters after what she’s put them through and the bill comes due on November 8.”

The internals of the St. A’s poll offered mixed signals. On the one hand, the “wrong track” number has ticked by up to 69 percent, bad news for the party in power. On the other, Democrats are leading on the “generic ballot” question for the first time since June 2021.

And while Hassan’s approval rating is underwater (48-51 percent), as it has been since Biden was sworn in, Bolduc’s approval numbers are even worse (41-51 percent). As Neil Levesque with the New Hampshire Institute of Politics put it, “The bad news for Democratic incumbents is that their standing with voters is weak. The good news for Democratic incumbents is that their Republican challengers are even weaker.”

Veteran GOP strategist Pat Griffin agrees the two candidates are weak, and he said as a result the most important element on Election Day will be voter motivation.

“This race will be decided by motivated bases on both sides,” Griffin said. “The other unknown — are independents feeling any love from either side? Is abortion a stronger driver than inflation, perceived incompetence of Democrats, crime, and immigration?”

Republican campaign pro Dave Carney put it another way. “Hassan is weak and the Democrats are also weak. They’re still in single digits (unlike Sununu) after the millions of dollars of attacks., as well as positive ads from the Democrats seem like it’s going to be a barn burner race right to Election Day.

“They can’t seal the deal,” Carney said of the Democrats.

Meanwhile, Griffin says, this midterm has not worked out the way Republicans had hoped earlier in the year when a “Red Wave” appeared to be on the horizon.

“‘None of the above’ is the leading candidate at the moment,” Griffin said. “And that is not how this mid-term needed to be the GOP.”