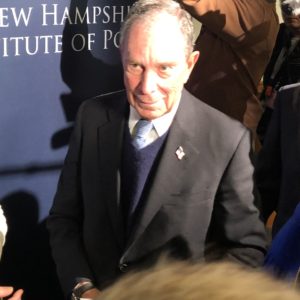 Michael Bloomberg told a New Hampshire audience on Tuesday that he’s “a little bit tired of listening to things that are pie in the sky” from his fellow Democrats on the topic of climate change, and he inferred that some of Democrats are being “disingenuous” with their talk of supporting the so-called “Green New Deal.”

The former NYC mayor and potential 2020 presidential candidate’s speech at the influential New Hampshire Institute of Politics could be described as “sober”—literally.

“I’m on a campaign to go a year without a drink. I’m two-months in,” the mayor—who’s been criticized as a Neo-Puritan for his attempted bans on soft drinks and junk food — told the audience at St. Anselm College.  “I did it two years ago…and then last year I created a white wine shortage across America.”

There was no shortage of criticism for President Trump–or his fellow Democrats– in Bloomberg’s speech at St. Anselm College near Manchester, a must-stop venue for presidential hopefuls.  While he attacked Trump as a man who “failed at business and I think it’s safe to say is failing at government, ” Bloomberg also criticized his fellow Democrats for pitching “pie-in-the-sky” policies on the environment rather than what Bloomberg considers realistic, achievable action.

“I thought it was quite a refreshing speech,” said Neil Levesque, Executive Director of the NHIOP.  “He skipped a lot of the rhetoric and went straight to solutions.” Levesque also told InsideSources that there was a great deal of interest in Bloomberg’s appearance (“I could have filled this room five times”)–including from his own mother. “This is the first time my mother’s ever asked me to get her a ticket to hear one of our speakers,” Levesque told the crowd. She was in the audience and got a shout out from the former New York Mayor.

It’s no secret that Bloomberg’s not a Trump fan. “I’m glad the shutdown is over for now, but the American people will continue to pay the cost for the White House’s total incompetence, just because the president is fixated on a wall we don’t need instead of the real challenges we face,” Bloomberg told the audience.  “To me, the government shutdown was our failure of executive leadership. And I think it’s an example of totally incompetent management.”

But on the question of whether the Republican-turned-Independent-turned Democrat will challenge Trump for the job by entering the 2020 Democratic primary, Bloomberg offered only an oblique reference to continuing to push the Democratic Party to champion the cause of climate change “whether I run for president or not.”

Climate change was the focus of Bloomberg’s remarks, as well as a the subject of his new book, Climate of Hope, written with Carl Pope. Every attendee was given a copy.

In Bloomberg’s view, “what’s happening [to the planet] is really scary, and it may be irreversible. I hope not, but to not stop and do everything you can—when there’s a threat to the entire world, whether it’s going to  happen or not, isn’t the issue.  You just have to take prophylactic action, and that’s what we’re trying to do,” Bloomberg said.

What sort of action?  This is where Bloomberg drew a line between himself and other Democrats like Sen. Elizabeth Warren and Sen. Kamala Harris who have embraced the “Green New Deal” while offering few details.

“It’s been great to see so many fellow Democrats embrace the idea of a ‘Green New Deal’…. It’s become fashionable to do so, but I think it’s time as a party that we started putting some meat on the bone and laying out exactly what a Green New Deal should include.  I believe that plan should bold and ambitious and,  most importantly. achievable.”

“I’m a little bit tired of listening to things that are pie in the sky, that are never going to pass, and we’re never going to afford. I  think it’s just disingenuous to promote those things,” Bloomberg said, an apparent reference to the Green New Deal proposal championed by NY Rep. Alexandria Ocasio-Cortez and endorsed by many of the 2020 contenders.  Instead, Bloomberg said, he’s putting together his own Green New Deal proposal which, Bloomberg said, would include taxpayer-funded benefits to people currently working in the carbon energy economy who would lose their jobs under the policy of de-carbonization.

“America’s rise to greatness was powered by coal miners and their sacrifices and hard work. I believe we as a country have to repay that debt to the coal mining communities because they are getting hurt.”

While Bloomberg takes the climate change issue very seriously—a boasted about funding private-sector lawyers for state attorney general offices to file green-policy lawsuits against private citizens — some of his claims didn’t hold water.  For example, Bloomberg claimed that the problem of climate change “can be seen in the wildfires in California, the hurricanes that strike our coast, and the hotter, dried weather is which causing problems for farmers.”

In fact, the number of hurricanes striking the US coast have fallen over the past century, the area burned by wildfires in the U.S. has declined about 80 percent since the 1930s and there is no evidence of a net increase in droughts.

Bloomberg claimed that his efforts to restrict carbon “could save a lot of lives,” But as Professor Bjorn Lomborg has noted, expanding the reach of electricity in the third world, largely powered by carbon energy, “allows the poor to stop cooking and heating with wood, cardboard and dung helps eliminate indoor air pollution, the world’s biggest environmental killer claiming 4.3 million lives annually.”

But Bloomberg wasn’t in New Hampshire for a science fair. He was delivering a political speech—in his case one that burnished his climate-change bona fides over the rest of the Democratic field and created some space between himself and would-be competitors.   And owning the climate-change issue is smart politics in a state where identity politics will have little impact (New Hampshire is the third-whitest state in the U.S.) and the upscale, affluent voters have made it a priority.

After the speech, Bloomberg was hosted at an event by Bill Shaheen, husband of popular Democratic Sen. Jeanne Shaheen. Shaheen, who’s up for re-election in 2020, has already announced that she will not be endorsing a candidate in the presidential primary.

But even without an endorsement, Michael Bloomberg boosted his fortunes in New Hampshire.