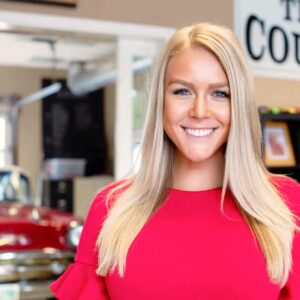 On Tuesday, November 8, we can make history. New Hampshire’s First Congressional district has the opportunity to elect its first Republican woman to represent us, Karoline Leavitt.

Granite Staters tend to elect the candidate they see as the hardest working, most genuine, and most energetic. Karoline exudes these qualities. Voters are seeing it firsthand as Karoline’s momentum continues to build. Her events are overflowing and the energy on the ground is palpable.

Karoline Leavitt is the homegrown, pro-business, pro-student candidate who will take on Washington’s inflation and advocate for more domestic energy production.

She is the perfect contrast to career politician Chris Pappas.

To put it nicely, Pappas has been a lackluster Congressman. His inability to stand up to his party has left us with record inflation, pain at the pump, and skyrocketing utility bills. On top of that, he voted to hire 87,000 new IRS agents to snoop on our businesses and families to ensure Biden and Pelosi take every last penny to fund their reckless spending.

Pappas has shown us he’s nothing more than a puppet for the D.C. elite. It’s no wonder why he’s going to desperate lengths to distract voters from his awful record.

We and many other voters are completely aghast at the advertisements from Chris Pappas and the Democrat Party which have been doctored to show Karoline Leavitt participating in a Nazi Salute.

This type of advertising is disgraceful and belittles the atrocities that happened during the Holocaust. Having a father who fought in World War II and was part of the company that released the prisoners from Dachau on April 29, 1945. Those advertisements are a slap in the face of those who fought against the Nazis in Germany and the atrocities experienced in those concentration camps.

Chris Pappas and the Democrat Party’s negative advertisements have no place in New Hampshire politics. But it appears he will do anything to prevent a strong, Republican woman from being elected.

On November 8 we can make history. We can take on Nancy Pelosi and Joe Biden head-on by sending a homegrown, New Hampshire-first Congresswoman to Washington D.C.

Please join us in supporting Karoline Leavitt for Congress.

As a N.H. State Representative, Judy Aron (R-Acworth) serves as Vice-Chair of the Environment and Agriculture Committee. She wrote this for NHJournal.com.